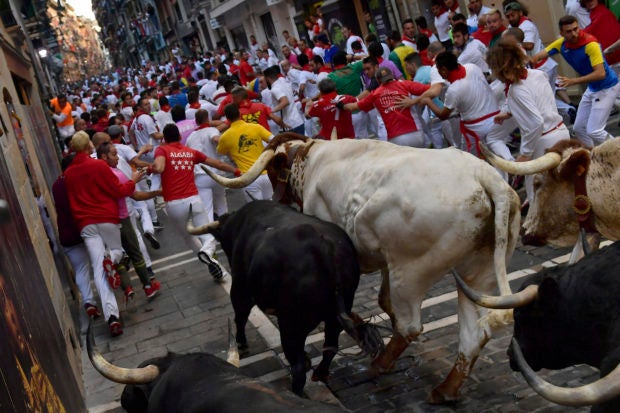 PAMPLONA, Spain — The fifth bull run of this year’s San Fermin festival in the Spanish city of Pamplona featured one goring and a handful of hard knocks after a protest by some revelers who complain that the traditional festivity is in danger of losing its heart-stopping thrills.

Thursday’s run was preceded by a protest by a small number of the “runners,” who sat on the street before the bulls were released. They consider that this year’s bull runs have lacked the usual excitement because the bulls have largely stayed behind the large steers which quickly guide them through the narrow, twisting streets to Pamplona’s bullring, where the bulls will be killed in bullfights later in the day.

An adherent has also been applied for over a decade to the cobblestoned streets which helps prevent the animals from slipping and being separated from the pack.

Reggie Gooden, a 60-year-old native of New York, said that the bull runs have become increasingly faster over the 30 years he has attended the fiesta.  He doesn’t run now due to some bad knees, but he said that the speed of the bull runs makes it almost impossible for even the most experienced runners to pull off the feat of sprinting just in front of a bull’s horns for several meters.

“I came in ’89 and ’90, and the runs were over 4 minutes, now they are over 2 minutes,” Gooden said. “What they have done protects the bulls, and it also protects the runners, because nobody is going to get out in front of them now… It is just the evolution of bull-running.”

The bulls from the Victoriano del Río Cortés cattle breeder stayed together through most of Thursday’s run, which was the longest of this year’s festival so far at 2 minutes, 49 seconds.

Even so, the Red Cross said a total of seven people needed to be taken to hospitals for treatment, along with another 67 people who were attended to by medics on site.

Regional hospital spokesman Tomás Belzunegui said a 27-year-old man from the Spanish city of Valencia was gored in the arm. The other injuries were from blows received in falls as the crowds of runners tumble out of the way of the much faster bulls during the race along the 930-yard (850-meter) cobbled-street course to the bullring.

The nine-day San Fermin fiesta that was immortalized by Ernest Hemingway in his novel “The Sun Also Rises” attracts about 1 million spectators every year. Most come to party late into the night before watching hundreds test their speed and daring against the bulls each morning. /kga