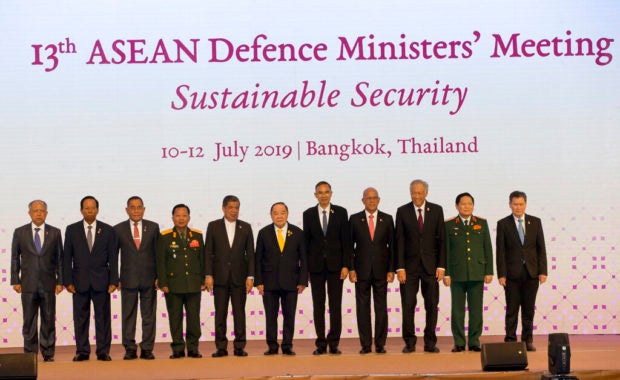 Asean defense ministers pose for a group photo ahead of the Asean Defense Ministers’ Meeting on July 11, 2019, in Bangkok, Thailand. AP

BANGKOK  — Defense ministers from the 10-member Association of Southeast Asian Nations (Asean) have met in the Thai capital to discuss issues including border controls, terrorism and illegal fishing.

Asean members have varying priorities, so the ministers focus on approaches to problem solving rather than tackling potentially divisive substantive issues. Their agreements touched only indirectly on such critical issues as territorial disputes in the South China Sea, where Vietnam and the Philippines face aggressive claims by China.

The attendees agreed Thursday to study a Philippine proposal for guidelines on maritime conflict management. They also agreed to look at proposals for a hotline to major powers in times of crisis, as well as border management, counterterrorism and raising awareness on the security implications of illegal, unreported and unregulated fishing. /ee