Vatican to dig up graves in search for missing teen 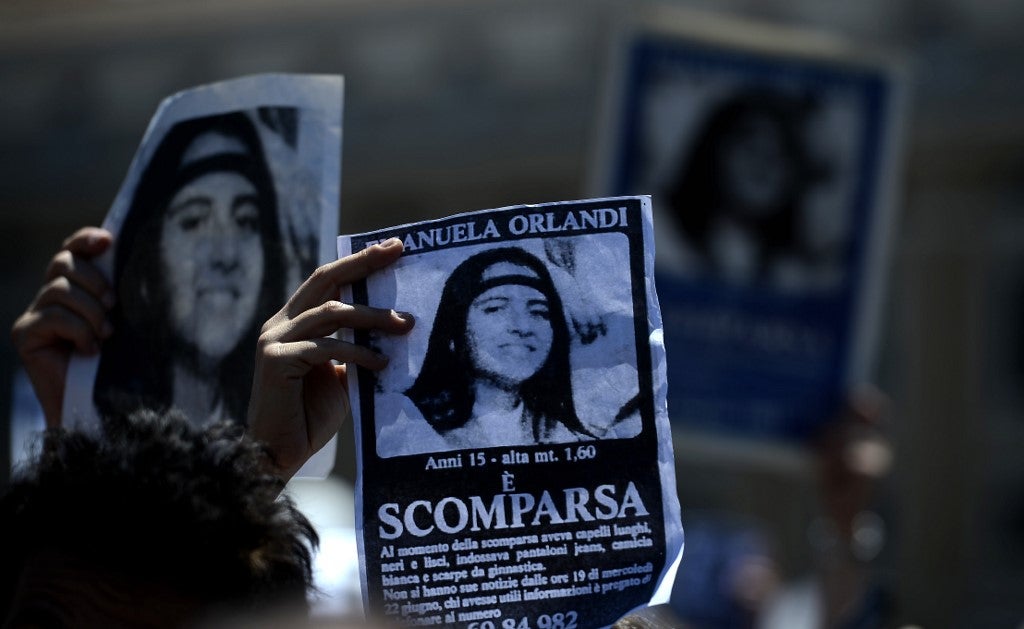 In this file photo taken on May 27, 2012 a demonstrator holds a poster of Emanuela Orlandi reading “Missing” during Pope Benedict XVI’s Regina Coeli noon prayer in St. Peter’s square, at the Vatican. (Photo by Filippo MONTEFORTE / AFP)

VATICAN CITY, Holy See — The Vatican will dig up two graves Thursday after an anonymous tip-off that they may contain the remains of an Italian teenager who went missing 36 years ago.

Emanuela Orlandi, the daughter of Vatican employee, was last seen leaving a music class aged 15, and theories have circulated for decades about who took her and where her body may lie.

Orlandi’s brother Pietro, who has campaigned tirelessly for the Vatican to open an investigation into her disappearance, will be present when the graves are opened at the Teutonic Cemetery.

The exhumation comes after the family’s lawyer received a tip-off with a picture of an angel-topped grave in the cemetery, and a message which simply read: “Look where the angel is pointing”.

The small, leafy cemetery, located on the original site of the Emperor Nero circus, is usually the last resting place for German-speaking members of Catholic institutions.

Beyond St Peter’s Basilica, in an area off-limits to tourists, neat rows of tombstones lie behind a wrought-iron gate, some shaded by palm trees, others bordered by pink roses.

The tombs that will be opened belong to two princesses, buried in 1836 and 1840.

The remains found within will be removed and examined on-site by Italian forensic anthropologist Giovanni Arcudi.

He expects to be able to roughly date the bones within about five hours, he said in an interview published by the Vatican on Wednesday.

“The state of conservation of the bones is what will determine the time required.

“Much depends on the environmental conditions, on the microclimate in which they are found, on the humidity, on the presence of infiltrations, on possible actions of microfauna,” he said.

It will be possible to say “whether a bone has been there 50 years or 150 years”.

He expects to be able to determine the gender and whether or not the remains belong to more than one person per tomb.

Arcudi will extract material for DNA analysis, regardless of his initial findings.

“The DNA test will be done in any case, in order to be certain and to exclude definitively and categorically the chance that any remains in the two tombs are attributable to poor Emanuela,” he said.

Results could take up to 60 days, he added.

‘Hoped to find her alive’

“But if Emanuela is dead and is buried there, it’s right that what has been hidden for so many years comes to light”.

According to some theories widely circulated in Italian media, the teen was snatched by a mobster gang to put pressure on the Vatican to recover a loan.

Another claim often repeated in the press was that she was taken to force the release from prison of Mehmet Ali Agca, the Turk who attempted to assassinate Pope John Paul II in 1981.

The family braced for a possible breakthrough last year, when human remains were found at a Vatican property in Rome.

In 2017, conspiracy specialists were driven into a frenzy by a leaked — but apparently falsified — document, purportedly written by a cardinal and pointing to a Vatican cover-up.

Five years earlier, forensic experts exhuming the tomb of a notorious crime boss at a Vatican church uncovered some 400 boxes of bones.

Enrico De Pedis, head of the Magliana gang, was suspected of involvement in her kidnapping and some speculated the youngster may be buried alongside him — but DNA tests failed to find a match.