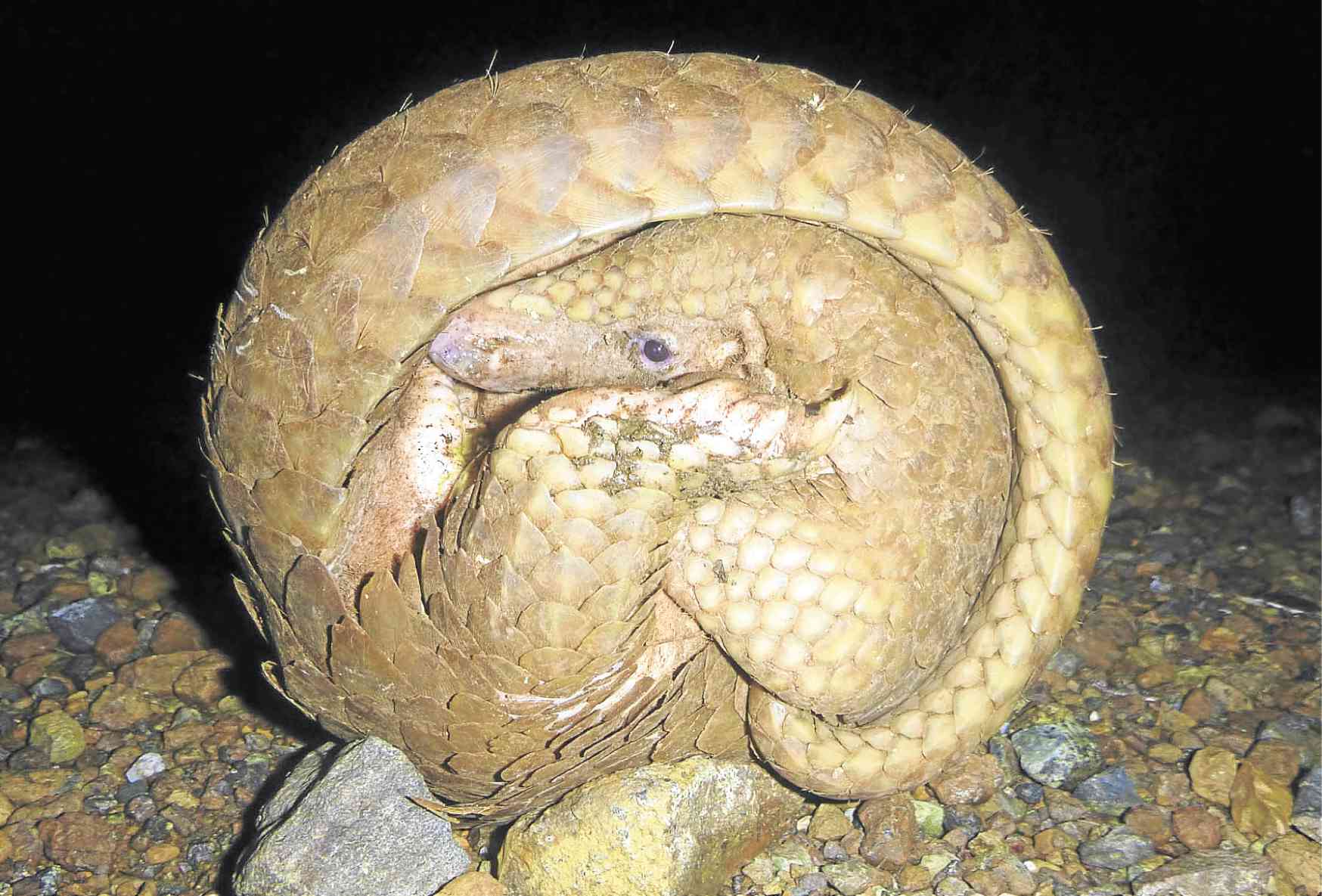 BALLED AND VULNERABLE The Philippine pangolin (Manis culionensis), known as “balintong” in Palawan province, is one of the eight pangolin species in the world. It is critically endangered. —USAID PROTECT WILDLIFE PHOTO

MANILA, Philippines — Only three of the 10 Philippine pangolins (Manis culionensis) rescued from wildlife traffickers two weeks ago have survived, illustrating an increasingly grim future for the endangered species.

Through the Palawan Council for Sustainable Development (PCSD), the three pangolins — one full-grown and two juvenile — made it back to their home in the Palawan forests on Monday, from where they had been snatched by men who intended to sell them for a hefty price nearly 800 kilometers away in Manila.

Even the three had “low chances” of survival, Emerson Sy of the Philippine Center for Terrestrial and Aquatic Research (PCTAR) said on Wednesday.

“They were stressed. If you only saw how they were transported, rolled in some kind of a fishnet and kept inside a basket without food and water,” Sy said.

On June 28, police arrested three men at a checkpoint in Tagaytay City in Cavite province after finding 10 pangolins in a cage inside the compartment of their van.

The suspects were identified as Simfroso Salazar, a driver from Calatagan, Batangas province, and Jorlan Torrequinda and Victor Equiza, both fishermen from Roxas, Palawan province. Salazar later posted bail.

According to the PCSD, the three might have made their way from Taytay town in Palawan using small boats, evading law enforcers stationed in major ports. They were reportedly heading to Chinatown in Binondo, Manila.

But while the smugglers were intercepted, the torment suffered by the pangolins had possibly already stretched for many days, if not weeks, said Glenn Maguad, officer in charge of the Wildlife Rescue Center.

Following the rescue, the pangolins were taken to the rescue center in Quezon City, where Maguad and his team immediately attended to their needs.

“When we received them, they all had severe bruises on their faces and appendages,” the veterinarian said. “They were really trying to escape.”

The animals were given food, first aid and medicines, even if their diets proved very specific to their habitats in Palawan.

Maguad said starvation, dehydration, stress and mismanagement in transport had killed the seven pangolins, which included a female pangolin that was carrying a fetus. It had perished along with its mother.

Demand for Philippine pangolin has increased with the influx of foreigners, who consider its scales an important ingredient in traditional medicine and the meat for pricey exotic dishes, a research group said.

Quoting the suspects, Police Maj. Rodney Baloyo, Tagaytay police chief, said on Wednesday that the poachers were supposed to sell the pangolins for P5,000 each in Metro Manila.

The market for pangolin has increased with the influx of  Chinese and South Koreans since 2010, said the PCTAR, which assists the DENR.

Restaurants offer the pangolin, either stewed or made into soup, “off the menu” for P40,000 per dish.

Sy said the center had monitored illegal trade of pangolins in Angeles City, Pampanga province; Alabang in Muntinlupa City; Binondo and Tondo in Manila; and the cities of Parañaque, Pasay and Caloocan.

According to Sy, locals in Palawan occasionally eat pangolin “only when they happen to catch one, but it is never actively hunted.”

Pangolins were sold on the average for P1,500 per kilogram, he said. An adult pangolin normally weighs 3.5 to 5 kilos.

The loss of the seven pangolins is yet another blow to the already dwindling population of Philippine pangolins.

One of the eight pangolin species in the world, little is still known about this mammal, locally known as “balintong,” which was only recently described as distinct from its closest relative, the Sunda pangolin (Manis javanica).

Philippine pangolins are classified as critically endangered in Palawan, while the Convention on International Trade in Endangered Species as of 2016 listed all pangolin species under Appendix I, which requires the highest category of protection.

This also meant that all commercial trade of pangolins caught in the wild is illegal.

An ongoing study by wildlife protection group Katala Foundation, funded by USAID Protect Wildlife and in partnership with the PCSD, aims to deeply look into the Philippine pangolin for the first time.

The government and advocates are racing not only against time but also against poachers and traffickers working almost round-the-clock to profit from this species.

A single live pangolin can reach up to P25,000, wildlife enforcers said.

“The boundary of Palawan is so porous, and many can get away with one or two pangolins,” said Jovic Fabello, PCSD spokesperson.

Levita Lagrada, officer in charge of the regulation and enforcement division of the PCSD’s Environmentally Critical Areas Network, said locals should be more involved in looking out for illegal activities in their communities.

“The fight against wildlife trafficking ideally begins at the barangay level,” she said.