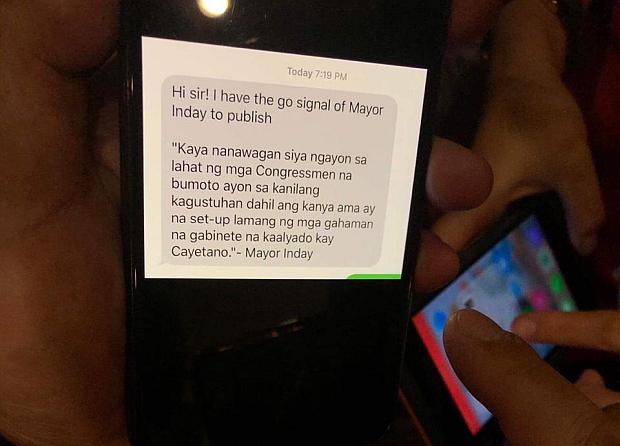 MANILA, Philippines — Who is trying to undermine President Rodrigo Duterte’s choice of Taguig Rep. Alan Peter Cayetano as Speaker of the House of Representatives?

Or should that be, who are?

Whatever, a text message circulating among members of the House shows disapproval in the chamber of Mr. Duterte’s endorsement of Cayetano, his former foreign secretary and vice-presidential running mate in 2016, as Speaker, sharing power with Marinduque Rep. Lord Allan Velasco.

The text message, shown to reporters by Anakalusugan Rep. Mike Defensor on the sidelines of a farewell dinner for former Speaker Gloria Macapagal-Arroyo at the Manila Hotel on Tuesday evening, was attributed to the President’s daughter, Davao City Mayor Sara Duterte.

Defensor said he had received the text message from a junior congressman who was “very close” to Mayor Duterte.

He did not name the congressman, saying his conversation with him was confidential.

It said: “Hi, sir. I have the go signal of Mayor Inday to publish. She is now calling on all congressmen to vote according to their own choice, as her father had been set up by greedy Cabinet members allied with Cayetano.”

The message was signed “Mayor Inday,” but the leader of the regional party Hugpong ng Pagbabago on Tuesday night denied it had come from her.

“If I’m going to make a call, I will name my choice, which won’t be based on the voters’ preference. Such a call, which has no objective, will achieve nothing,” Mayor Duterte said in a Viber message to Inquirer.net.

“Look for congressmen who are unhappy with term sharing. Most likely, it came from them,” she added.

Mayor Duterte said the texter attributed the message to her “to gain support for whatever [it is they are] trying to do.”

In a statement on Wednesday, she called on Defensor to “stop sowing intrigue” and name his source.

Defensor apologized to the mayor for dragging her name into the controversy, but refused to name the source of the text message to him.

“I did not say [the text message] came from her or a congressman. I did say, though, that there was another person who got the same message,” he said on Wednesday.

According to sources, who asked not to be identified for lack of authority to talk to journalists, the text message is part of a campaign that has arisen from unhappiness among House members over the President’s choice of Cayetano, which implies his rejection of the Duterte Coalition’s candidate for Speaker, Davao City Rep. Isidro Ungab.

Her brother, Rep. Paolo Duterte of Davao City, also offered himself as a candidate last week, but withdrew after their father, the President, objected.

On Monday, after a meeting with the principal candidates in Malacañang, the President announced his endorsement of Cayetano as Speaker for the first 15 months of the 18th Congress, and Velasco for the last 21 months of the term.

Defensor said that while that might have decided the choice of Speaker, “the reality is there are still movements.”

He did not elaborate, but Bayan Muna Rep. Carlos Isagani Zarate said the text campaign showed the speakership contest was “far from over.”

“As it is, there still seems to be a brewing brutal brawl for the speakership because not all are satisfied with the supposed Magellan solution, or the 15-21 term sharing solution for Representatives Cayetano and Velasco,” Zarate said.

Why ask the President?

Sen. Richard Gordon, an ally of the President, on Wednesday questioned the congressmen’s decision to go to the President and ask him to endorse a candidate for Speaker.

“Why do the congressmen ask the President to intervene in their affairs? Aren’t they supposed to be independent?” Gordon asked at a news forum in Manila.

“These are people we elected as our leaders. Why are they reneging on their responsibility to use democracy to get the best of the best?” he said.

Article VI, Section 16 of the Constitution provides for the election of the Senate President and the House Speaker by a majority vote of all of their members. —With reports from Nestor Corrales, Darryl John Esguerra and Pathricia Ann V. Roxas