Salceda said Romualdez, who was named by Duterte as the next House Majority Leader, called a meeting Tuesday that was attended by 72 lawmakers who committed to follow the Chief Executive’s endorsement of his 2016 vice-presidential running mate, Taguig Rep. Alan Peter Cayetano for the Speaker seat.

“We unanimously agreed to follow the wish of the President on the speakership, and Martin is accepting the position of Majority Leader… no ifs, no buts, no unless and no excepts,” Salceda said. 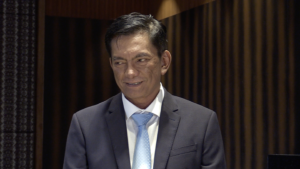 The economist said they also asked Romualdez to “do his job to develop a robust and dynamic relationship with the Speaker,” and “fight for the agenda” of the President.

Salceda earlier bared that 167 House members signed a manifesto of support for Romualdez provided that Duterte does not pick his choice.

In a speech during the oath-taking of newly appointed officials in Malacañang Monday, Duterte said Cayetano would share the three-year term with Marinduque Rep. Lord Allan Velasco while Romualdez would be the Majority Leader.

In a separate statement, Malacañang said Cayetano would serve for the first 15 months, while Velasco would take over for the remaining 21 months.

“Tanggap namin agad, it’s not as if we lost heavens,” the congressman said.

Salceda earlier admitted he would head the appropriations committee if Romualdez gets elected as Speaker but now that the President has spoken, he said Davao City 3rd District Rep. Isidro Ungab would chair the powerful panel.

Cayetano, however, summoned him for a meeting this afternoon, Salceda said without providing further details. (Editor: Jonathan P. Vicente)