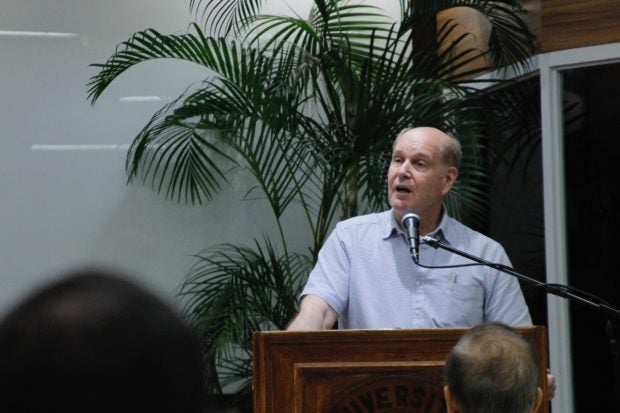 MANILA, Philippines – Even with three tranches of reparation benefits already awarded to victims of human rights violations and their relatives during the Martial Law regime, some have not received any financial compensation.

In an event on Tuesday where American lawyer Robert Swift explained how the class suit against former President Ferdinand Marcos’ heirs was won, a claimant demanded answers from Swift and former Commission on Human Rights (CHR) chair Etta Rosales on why they were delisted from the list of beneficiaries.

Elena Jimenez, whose husband was said to be forcibly taken by elements of the military in August 1985 in Tarlac with two others, said they were delisted because they failed to present proof that their relatives were Desaparecidos, or people who were made to disappear.

(Until now, we have not received anything from the US (court ruling). We lost in the Hawaii court decision. We do not know the processes, and many of us were denied.)

(On August 17, 1985, three people were taken by the military, including my husband. Why is that we cannot get justice?)

Jimenez said she only received compensation under Republic Act 10368 or Human Rights Victims Reparation and Recognition Act of 2013. But from the Hawaii court ruling which provided a $1,500 grant to martial law victims, she did not receive any.

Swift’s legal victories have facilitated the release of grants from the Marcoses’ supposed ill-gotten wealth. Three tranches have been released from the sale of paintings previously owned by former First Lady Imelda Marcos.

In a separate interview, Jimenez narrated that her husband was taken by state forces based on allegations that he was a member of the Communist Party of the Philippines’ armed wing, the New People’s Army (NPA).

“Niyaya sa bahay, hindi na bumalik. No’ng tinignan namin (sa kampo ang sabi) ‘wag mo nang hanapin wala na ‘yon (He invited him to come with them. He never came back. When we went to the camp we were told that we should not look for him anymore),” she explained in an ambush interview with reporters.

Jimenez is not the only claimant who has voiced concerns over the reparation system.

Leonardo Lasca, a former barangay official in Tarlac, said he was illegally arrested while the military massacred some of his relatives.

(My grandfather, uncle, father and other relatives were massacred while I went to jail. On February 12, 1977, they brought me to Camp General F. Macabulos.)

He also narrated that he was jailed for four months but the owner of the land he was tilling, a certain General Soriano, helped him. He said he was also tortured.

Unlike Jimenez, Lasca did not enlist under the Hawaii ruling beneficiaries. However, he also did not receive any grant under R.A. 10368.

But similar to Jimenez’ husband, he was also suspected to be a communist rebel, which he said was ludicrous as he had worked for a high-ranking police official.

Rosales and Swift explained during the forum that they have encountered problems verifying whether the claimants were victims of martial law atrocities, as some fraudulent groups have tried to take advantage of the situation.

Swift also noted that the Hawaii district court hearing the class suit heard the argument of the Marcoses, who claimed that there is no way to verify if the claimants were really victims of human rights violation during Marcos’ over two-decade rule.

Rosales, on the other hand, encouraged people to work together to identify the recipients of the grant properly.

“I understand your pain. I myself felt that, I myself talked to Bob (Swift) asking him to please reconsider a lot of those who were delisted. Several times, I kept on demanding it and said, ‘I’m sorry Etta, there’s nothing much I can do there,’” she said.

“So many victims were denied, but these victims were denied by the R.A. 10368. I felt so bad because I felt they were real. Do you know what they did? It was beautiful. They made documents of all their claims, they presented it to the church, and the bishop said we will take custody of your claims,” she added. (Editor: Eden Estopace)