Indonesia to send 210 tons of garbage back to Australia 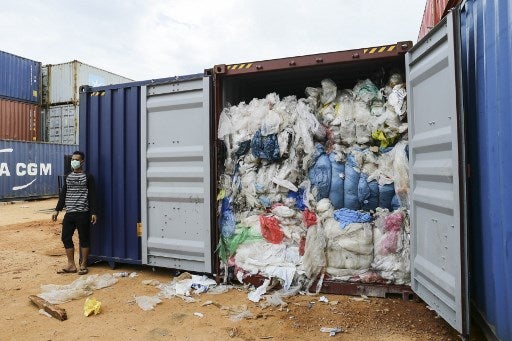 This picture taken on June 15, 2019 shows a man standing next to one of 65 containers full of imported plastic rubbish being inspected by the local environment office, at the Batu Ampar port in Batam. – Indonesia returned five other containers of rubbish to the United States and will not become a “dumping ground”, officials said on June 15, the latest Southeast Asian country to return imported waste. (Photo by ANDARU / AFP)

JAKARTA — Indonesia said Tuesday it would send more than 210 tons of garbage back to Australia, as Southeast Asian nations push back against serving as dumping grounds for foreign trash.

The eight containers seized in Surabaya city should have contained only waste paper, but authorities also found hazardous material and household trash including plastic bottles and packaging, used diapers, electronic waste and cans, a spokesman for the East Java customs agency told AFP.

Following the inspection the Indonesian environment ministry recommended “the items be re-exported,” the agency said in a separate statement Monday.

“This is done to protect the public and Indonesian environment, especially in East Java, from B3 waste,” it added, referring to hazardous and toxic materials.

Huge quantities of rubbish have since been redirected to Southeast Asia, but opposition to handling exported trash is growing in the region.

Indonesia announced last week it was sending back 49 containers full of waste to France and other developed nations.

In May, neighboring Malaysia announced it was shipping 450 tons of imported plastic waste back to its sources, including Australia, Bangladesh, Canada, China, Japan, Saudi Arabia and the United States.

The Philippines, meanwhile, returned about 69 containers of trash back to Canada last month, putting an end to a diplomatic row between the two countries.

Global concern over plastic pollution has been spurred by shocking images of waste-clogged rivers in Southeast Asia and accounts of dead sea creatures found with kilos of refuse in their stomachs.

Around 300 million tons of plastic are produced every year, according to the World Wide Fund for Nature (WWF), with much of it ending up in landfills or polluting the seas, in what has become a growing international crisis.  /muf