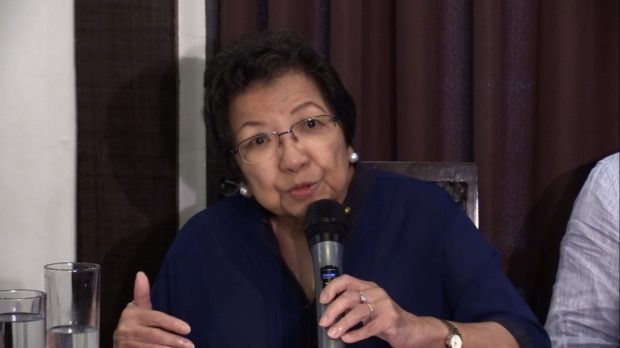 According to Rosales, who attended an event where Swift explained the legal processes behind the class suit on Tuesday, the lawyer deserves to be paid for starting the long-drawn legal battle against the heirs of former President Ferdinand Marcos.

“Why is he getting so much money?  I try to explain it in this way, can we say that Bob started this whole thing in 1986?  How long ago was that?  And these entailed the money of his office, and these entailed travels not only to the Philippines, to Switzerland, and to several other areas,” she noted during the forum held at the University of the Philippines in Diliman.

“Maybe after more than three decades, he deserve a little more?  Because everything depends on him.  If he doesn’t collect and he’s not able to get a successful collection, then all of his money are gone,” she added.

Swift, whose legal battle against the Marcos family brought about settlements for victims of the martial law regime, requested 30 percent of the recent $13.75 million grant to members of the class suit.

Several martial law victims have protested the fees, claiming that Swift might get more than the claimants and the Philippine government itself.  In a previous interview with the Philippine Daily Inquirer, claimant Jake Almeda Lopez said that work in class suits are much easier than ordinary cases.

Swift’s counterpart in the Philippines, lawyer Rodrigo Domingo, however insisted that the suit was a complex case.

Rosales echoed these sentiments, saying that Swift’s job was a landmark in seeking accountability for human-rights abuses.

“Media has said this to me several times, the class action suit is the only human-rights suit that has succeeded in being enforced effectively.  I think we owe Bob Swift a big round of applause,” Rosales told the audience, majority of which are victims of the martial law under the Marcos regime.

“The (financial) risks involved have to be considered.  Besides, nobody has done this in the way that he has done it.  He’s the only one working on it.  Look at him now, Bob, he used to have a lot of hair,” she added, eliciting laughter from the crowd.  “Consider these things, he is a human being.”

The Marcos regime, which spans for more than two decades, were marred with allegations of corruption and extra-judicial killings.  As of now, there are three payouts given to victims of torture, summary executions, and enforced disappearances through Swift’s legal victories in a Hawaii court. (Editor: Jonathan P. Vicente)