US Customs seizes ship where huge cocaine load was found 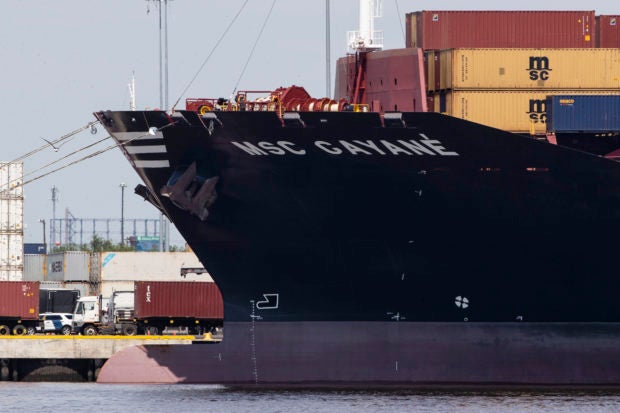 File–This file photo from June 24, 2019 shows the MSC Gayane moored at the Packer Marine Terminal in Philadelphia. Customs authorities announced on Monday, July 8, 2019, they have seized the cargo ship where agents discovered nearly 40,000 pounds, or almost 18,000 kilograms, of cocaine when the vessel was inspected in Philadelphia last month. (AP Photo/Matt Rourke, File)

“A seizure of a vessel this massive is complicated and unprecedented — but it is appropriate because the circumstances here are also unprecedented. We found nearly 20 tons of cocaine hidden on this ship,” McSwain said. ”

When a vessel brings such an outrageous amount of deadly drugs into Philadelphia waters, my office and our agency partners will pursue the most severe consequences possible against all involved parties in order to protect our district — and our country.”

The ship is subject to possible forfeiture to the U.S. The value of the ship and its other contents hasn’t been released.

MSC is one of the world’s largest shipping lines in terms of containers, and has not been accused of any wrongdoing. A spokesman for MSC said the company would have no immediate comment.

At least six crew members have been charged with conspiracy to possess cocaine aboard a ship. The federal investigation continues.

Gayane is at least the third ship in Mediterranean Shipping Company’s fleet to have been raided by U.S. authorities this year.

In February, customs agents seized the largest shipment of cocaine intercepted at the port in Newark, New Jersey, in nearly 25 years — about 3,200 pounds, or 1,451 kilograms — from a container aboard the MSC Carlotta.

In March, law enforcement agents searched a container offloaded from the MSC Desiree at Philadelphia’s port and found 13 large duffel bags stuffed with 1,185 pounds, or 538 kilograms, of cocaine.

At the time, it was the largest cocaine seizure at the port in more than 20 years.

Company officials did not reply to questions Monday about drug smuggling aboard the ships. Last month, MSC said in a statement that “unfortunately, shipping and logistics companies are from time to time affected by trafficking problems. … MSC has a longstanding history of cooperating with U.S. federal law enforcement agencies to help disrupt illegal narcotics trafficking.” /gsg