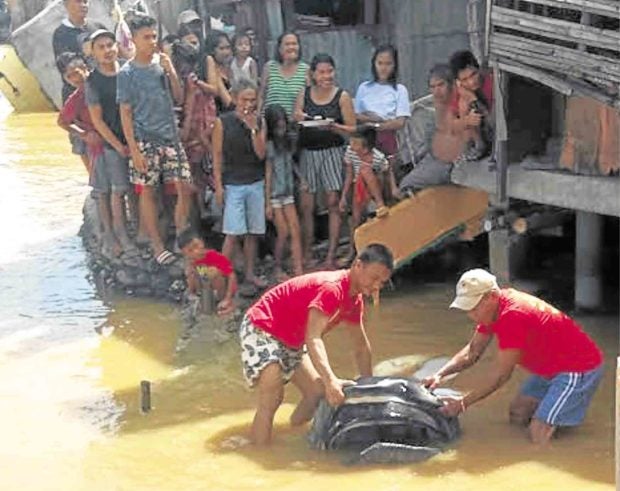 LEFTOVER Fishermen hold the severed head of a megamouth shark after the rare marine animal was slaughtered in Cagayan de Oro City. The rare shark was found wounded and entangled in a fishing net in Macabalan Bay on July 5. —MENZIE MONTES / CONTRIBUTOR

CAGAYAN DE ORO CITY, Misamis Oriental, Philippines — A rare shark that was entangled in a fisherman’s net off Macabalan Bay in this city last week ended up being slaughtered and eaten by residents, a fisheries official said.

The megamouth shark (Megachasma pelagios), which is protected under the country’s fisheries law as it is considered endangered, was alive but wounded when it was trapped in a fishing net off Barangay Cugman here on Friday, said Cheryl Magante, fishing regulation officer of the Bureau of Fisheries and Aquatic Resources (BFAR) in Northern Mindanao region.

Magante said when BFAR officials reached Barangay Cugman, residents had already slaughtered the shark and divided the meat among themselves. The shark weighed about 400 kilograms and was 3 meters long and a meter wide.

Magante said the BFAR only recovered about half of the shark and its tail, which they buried in Barangay Kauswagan.

One of the fishermen interviewed by a local radio station on Saturday, however, claimed that the megamouth shark was eating their catch of small fish.

The fisherman, who was not identified in the interview, said they were forced to spear and kill the shark because it was weighing down their net.

He said they chopped a section of the shark and sliced this into pieces while they were still at sea. The fishermen continued doing this after they reached shore on July 5.

According to Oceana, an international ocean advocacy group, the megamouth shark is considered the smallest of three species of filter-feeding sharks after the whale shark and the basking shark.

This rare shark, distinguished by its large and circular mouth, can weigh up to 1,215 kg, it said.

“This species has only been observed in the wild a few times, and less than 60 individuals are known by scientists to ever be captured or observed,” Oceana said in its website.

Catching, transporting and killing endangered marine species are considered criminal offenses under Republic Act No. 8550, or the Philippine Fisheries Code of 1998.

But Magante said the BFAR had not yet taken any legal action as the agency had yet to identify people who slaughtered and ate the shark.

She said it was possible that the shark was following the trail of krill when it got caught in the fishing net.

Although megamouth sharks can usually be found in deep waters, some of them have been seen in shallower waters in this city in recent months.

Magante said a group of at least seven megamouth sharks was seen just near the shore of Cugman early this year.

Megamouth sharks and whale sharks, the latter locally known as “tawiki,” were seen in Macajalar Bay off the coast of Misamis Oriental province in the early 2000s.

Townsfolk in the coastal town of Talisayan in Misamis Oriental even used to celebrate the Tawiki Festival due to the abundance of whale sharks in the area. However, the whale sharks eventually disappeared from the town’s waters, forcing the community to stop holding the festival.