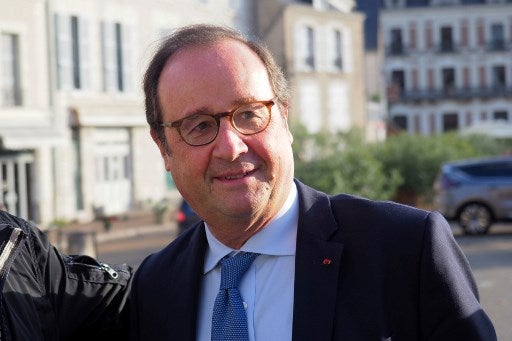 AVIGNON, France — Former French president Francois Hollande made the first tentative step into what may or may not be a second career this weekend when he trod the boards at one of the world’s biggest theatre festivals.

The Socialist leader — who was forced from political stage by his one-time acolyte Emmanuel Macron in 2017 — appeared for 15 minutes in a play at the Avignon theatre festival in the South of France.

With acting skills often cited as one of the key qualifications for a career in politics, Hollande acquitted himself rather well in his 15-minute surprise appearance in a sprawling meditation on the state of Europe by one of France’s most acclaimed novelists, Laurent Gaude.

All the more so since he was playing himself and had to face a residual scepticism that saw him struggle with the lowest approval rating in French political history at the end of his mandate.

Hollande, 64, known for his sense of humor even in the gravest circumstances, managed to make the audience laugh with a quip at the expense of his party, which has gone into a precipitous decline since his presidency.

But for most of his time on stage Hollande struck a graver tone, warning of the dangers of the rising wave of nationalism in Europe in response to questions from the cast.

Nationalists were out to sabotage Europe from the inside, he told the audience of the three-hour “Us, Europe Banquet of the Peoples,” slipping into political rally mode.

“They don’t just want countries to leave the EU, they want the end of the whole European project. It’s their political objective,” he said.

But Hollande acknowledged that his own errors may not have helped.

“My regret is not to have been shared to a bigger number of French people our commitment to the European project,” he said.

He also said he felt bad about the way the refugee crisis in the wake of the war in Syria was handled, with the lack of EU unity in taking in asylum-seekers across several countries.

Hollande insisted that “Europe always makes the right decisions but always late” and “in he meantime camps developed” and populists were able to step in to make “people fear for their identity.”

“France and Germany have a responsibility to clear the way” for the others, he declared in the play, which charts the European project from a continent ruined by war to the present day.

Passions
It was one of two major productions at the festival concerned with the EU. Europe was also at the heart of the opening show “Architecture.”

Hollande’s great rival, Nicolas Sarkozy — whom he condemned to early retirement after beating him in the 2012 presidential election — has carved out a career for himself as a writer as well as the kingmaker of the divided traditional French right.

It was passion and another bestselling memoir that undid Hollande — that by his former lover Valerie Trierweiler.

The journalist eviscerated him in her tell-all “Thank You For This Moment”, torpedoing his presidency after the paparazzi caught him paying nocturnal visits on a scooter to his present partner, actress and producer Julie Gayet. /ee