“Manila’s commercial centers are all syndicated,” Atienza said during the Saturday Forum at Annabel’s Restaurant in Quezon City.

According to him, Divisoria, which controlled by an “active syndicate,” is the “biggest money maker.” 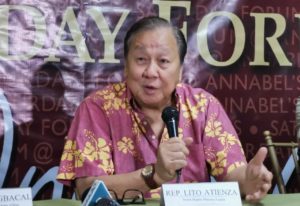 Atienza’s revelation comes after Manila Mayor Isko Moreno revealed that he was offered a bribe of P5 million a day if he would drop his promise to get rid of illegal vendors in the national capital’s congested main roads.

Asked if he did something to stop the criminal syndicates, Atienza answered that he and his colleagues in the local government “fought them to the nail every day.”

“As long as Isko’s working and fighting it out, it means di pa sila tumatanggap,” he said. “Pag tumahimik at bumalik ang kaguluhan, you can now conclude after hearing what I’m saying.”

[As long as Isko’s working and fighting it out, it means they’re not yet getting bribes. Once they become silent and chaos returns, you can now conclude after hearing what I’m saying.]