MANILA, Philippines — Should Francisco “Isko Moreno” Domagoso excel in his three-year stint as Manila mayor, he has a “good chance” of getting a higher office, Buhay party-list Representative Lito Atienza said on Saturday.

But can Moreno be the next president, perhaps?

“After Duterte, talagang ‘What do we do?’ Anybody can fill in that role,” he said.

“And a good mayor of Manila is always presidentiable.” 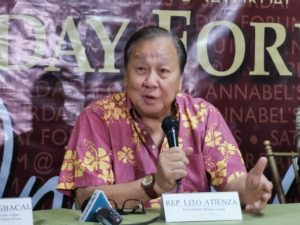 However, he clarified that it is only God who’ll decide on who will be the next chief executive. “‘Pag ikaw ang nginitian ng Diyos, ikaw ang Presidente.”

Atienza also commended Moreno for his cleaning operations during his first week as Manila mayor, adding that he hopes he will be “a different one” compared to his predecessor, Joseph Estrada.

However, the Buhay party-list representative joked that Moreno’s job might take a toll on him, especially on his looks.