Violence erupts as Nutriasia workers go on strike in Laguna 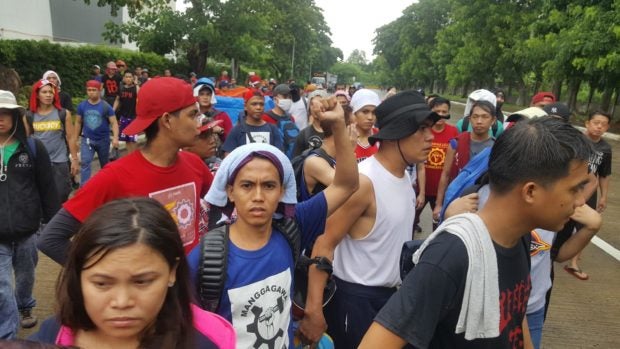 NutriaAsia employees “locked down” the company’s Laguna factory and took to the streets in a protest that was dispersed by police Saturday. Ten were arrested. Contributed photo

SAN PEDRO CITY — Violence erupted at the factory of condiment-maker NutriAsia in Cabuyao City in Laguna province after “hundreds” of workers went on strike Saturday morning.

At 10 a.m., policemen began to disperse protesting workers and arrested “no less than ten leaders” of the workers’ union, said Laguna police chief Col. Eleazar Matta in a phone interview.

Hermie Marasigan, national president of the labor alliance Olalia-Kilusang Mayo Uno, said the strike erupted at 5 a.m., with about “400 paticipating workers,” calling on the management to implement a regional labor office order that regularizes them.

Marasigan said the office of the labor secretary, however, reversed this decision, but the labor union, Kasapina-Olalia has a pending motion.

Matta said police were deployed to the factory inside the Light Industry and Science Park after the workers “locked down” the company’s gate.

“That is theft, robbery, illegal detention. These are criminal offenses,” Matta said.

Marasigan said the police violated their rights as there was no court order to disperse them.

He said there were rock pelting and that the police and security guards resorted to “bulldozing” the factory’s gate and using “hot water” to disperse the strikers.

The police said the rock pelting “came from inside” the workers’ ranks.

In August 2018, a workers’ strike at NutriAsia in Bulacan also ended in a violent dispersal.

Marasigan said the National Conciliation and Mediation Board in Calabarzon had called for a meeting with them. (Editor: Leti Boniol)