UN calls for Libya ceasefire as death toll climbs to 1,000 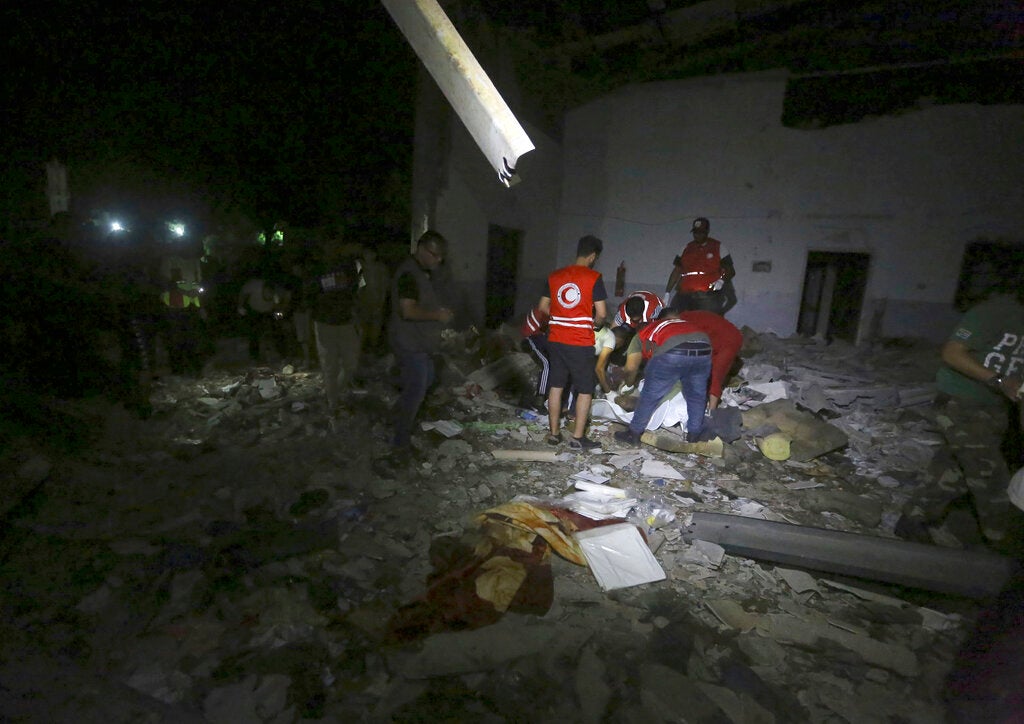 TRIPOLI, Libya — The UN Security Council called Friday for a ceasefire in Libya as the death toll from a three-month offensive on Tripoli reached 1,000, including scores killed in an air strike that hit a detention center for migrants.

The council condemned the late Tuesday attack on the Tajoura detention camp east of Tripoli and “stressed the need for all parties to urgently de-escalate the situation and to commit to a ceasefire”, said a joint statement.

Libyan commander Khalifa Haftar, whose forces hold eastern Libya and much of the country’s south, launched an offensive in early April to wrestle the capital from forces loyal to the UN-recognized Government of National Accord (GNA).

Air strikes and ground fighting have since left nearly 1,000 people dead and some 5,000 wounded, the UN’s World Health Organization said.

The fighting has forced more than 100,000 people to flee their homes and threatens to plunge Libya into deeper conflict.

Among the dead are 53 migrants killed Tuesday night in an air raid on a detention centre in the Tripoli suburb of Tajoura, held by the GNA, which accused Haftar’s forces of carrying out the strike.

A Geneva-based spokesman for the International Organization for Migration said six children were among the migrants killed.

Joel Millman said that 350 migrants, including 20 women and four children, were still detained at the centre, one of five air hangars hit in the raid.

World powers have been divided over how to respond to Haftar’s offensive, with the United States and Russia refusing to condemn the Libyan strongman.

The British-drafted council statement condemned the attack on the migrant camp, called for a return to political talks and for full respect of the arms embargo on Libya.

It followed a closed-door council meeting on Wednesday during which US diplomats said they needed more time to consult with Washington on the proposed text.

The United Nations has called for an independent investigation to determine who was responsible for the strike on the center, which housed some 600 migrants, mainly from African countries.

President Recep Tayyip Erdogan of Turkey — which backs the GNA — called for an end to “unlawful attacks” by Haftar’s forces during a meeting with Libyan Prime Minister Fayez al-Sarraj in Istanbul on Friday, the Turkish presidency said.

UN agencies and humanitarian groups have repeatedly voiced concern over the plight of thousands of migrants and refugees held in detention centers near combat zones in the capital.

Secretary-General Antonio Guterres has expressed outrage over the attack and said the United Nations had shared the coordinates of the detention centers with the warring sides to protect the civilians.

The carnage in Tajoura was “a tragedy that should have never happened”, said Charlie Yaxley, spokesman for the UN’s refugee agency.

Libya has become a major conduit for migrants seeking to reach Europe and remains prey to numerous militias vying for control of the country’s oil wealth.

Rights groups say migrants face horrifying abuses in Libya, and their plight has worsened since Haftar launched the offensive against Tripoli.

According to the UN, some 5,700 refugees and migrants are being held in detention centers in Libya, 3,300 of whom are vulnerable to fighting in and around Tripoli.

An initial lightning assault in early April saw Haftar’s self-styled Libyan National Army steam towards the capital. But they have since been bogged down on its southern outskirts, where frontlines have been frozen for months.

After the setback, Haftar’s forces threatened to intensify strikes against their rivals.

Both sides have launched daily air raids throughout the fighting and each lost several planes.

The rival camps have remained convinced that with the help of their backers, they can win the battle.

The GNA receives support from Turkey and Qatar, and Haftar is backed by the United Arab Emirates, Egypt, and according to experts, to some degree by the United States.  /muf

Read Next
US demands El Chapo forfeit $12.7 billion in drug money
EDITORS' PICK
What to watch out for when selecting a video surveillance solution
DOH says COVID-19 cases plateauing, but public shouldn’t be ‘complacent’
House energy committee chair Arroyo bats for cheap electricity
Unleash the photographer in you this World Photography Day with vivo smartphones
23,000 cops to be deployed nationwide for school reopening
Look Through: The fate of impounded stray dogs
MOST READ
Sharon Cuneta asks for prayers for friend in ICU who suffered silent stroke
Light therapy could be the answer to your sleep problems
Korina Sanchez reunites with former ABS-CBN co-anchors Julius Babao, Cheryl Cosim
Solons file resolutions seeking probe on ABS-CBN, TV5 merger
Don't miss out on the latest news and information.