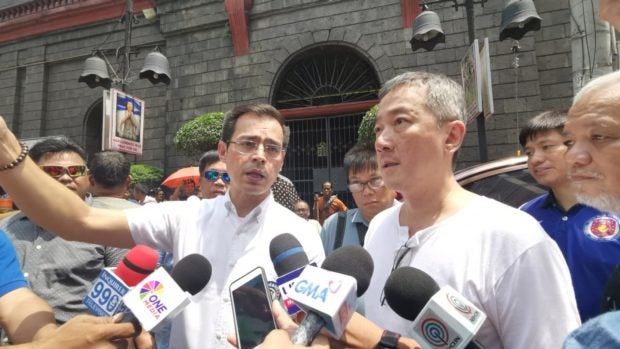 Manila Mayor Francisco “Isko Moreno” Domagoso talks to Barangay 289, Zone 27 Chairman Nelson Ty as he made a surprise visit in Binondo on Friday, July 5, 2019. The newly-elected mayor ordered the demolition of a make-do barangay hall as well as the removal of a firetruck parked behind the monument of Roman Ongpin in Binondo. Katrina Hallare/INQUIRER.net

MANILA, Philippines — Newly-elected Manila Mayor Francisco “Isko Moreno” Domagoso on Friday made a surprise visit in Ongpin Street, Binondo, and ordered the demolition of a barangay hall-turned barracks beside a heritage site.

Moreno used a sledgehammer and started pounding the barangay hall, which was being used as storage for firefighting equipment. The barangay hall was located behind the monument of Filipino-Chinese businessman Roman Ongpin.

The Manila Mayor also ordered to tow a firetruck parked beside the barangay hall and obstructing the road. The firetruck belongs to the Filipino Chinese Binondo Fire Prevention Association Incorporated.

He also informed Barangay Chairman Nelson Ty of Barangay 289, Zone 27, of his action removing the firetruck.

Part of Moreno’s campaign promises that propelled his bid for Manila mayor was to clean up the country’s capital city and restore its heritage sites, including parks and museums.