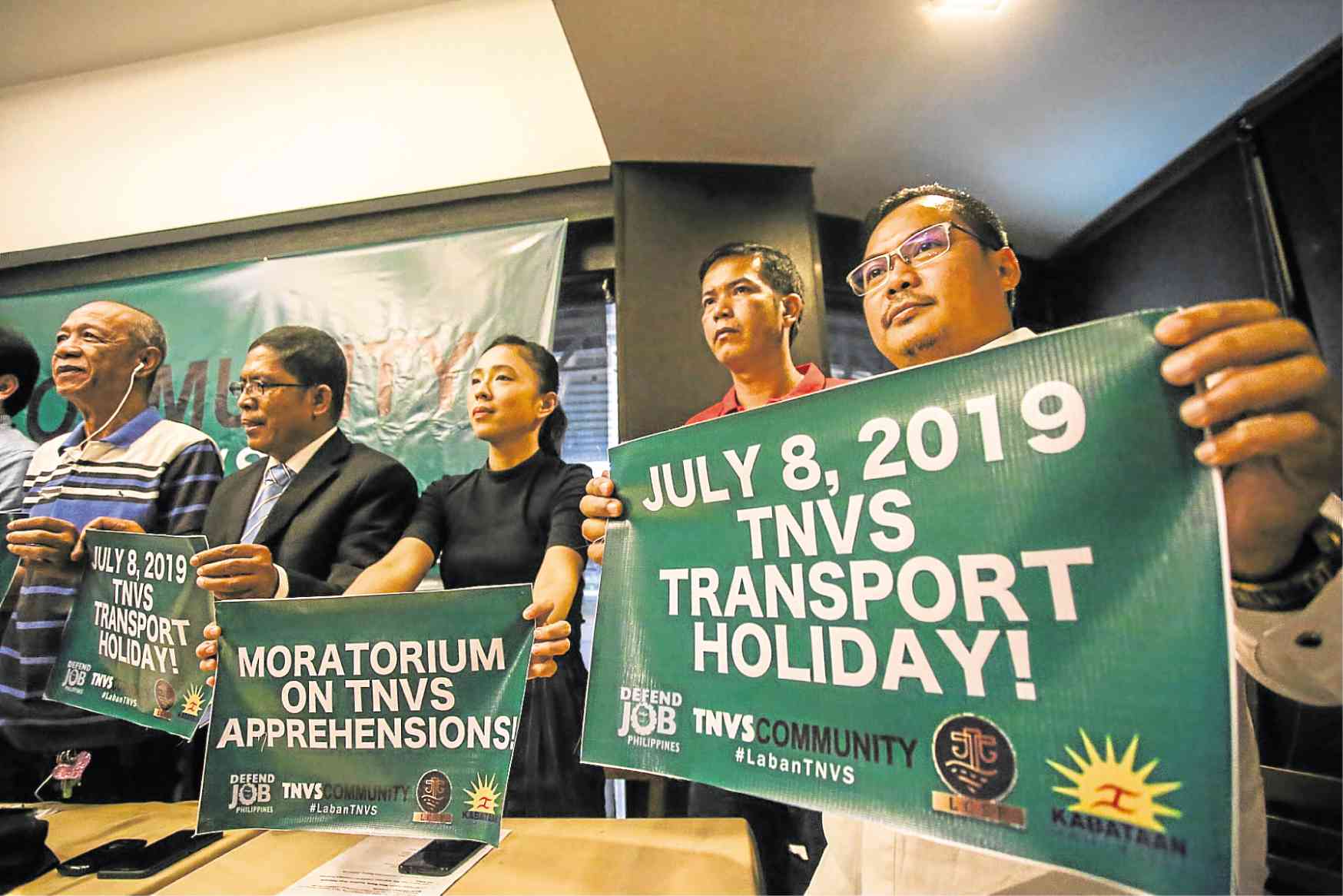 CALL TO ACTION Members of the TNVS community urge their members to join them in a transport holiday on Monday. —Jam sta rosa

A coalition of groups representing the Transport Network Vehicle Services (TNVS) community announced a plan to stage a transport holiday on Monday to protest the Land Transportation Franchising and Regulatory Board’s (LTFRB) “unreasonable” process in granting or denying franchise applications.

The strike, the first since TNVS drivers were introduced by the Department of Transportation in 2015, was by far the strongest action taken by the sector, which recently lost 5,000 members who failed to get a franchise from the LTFRB.

At press time, however, the number of participants could not be estimated.

Only Janina Pineda of Hatchback Philippines, which has 15,000 members, gave a ballpark figure, saying they expected 35,000 TNVS drivers to join the strike. There are currently around 45,000 TNVS driver-members.

Even as the coalition leaders warned of a tougher commute for regular riders next week, it was apparent during their press briefing on Thursday that the plan to hold a mass action had been rushed and had yet to be cascaded properly to their members.

For example, it was clear that the decision to go offline for 12 hours—between 6 a.m. and 6 p.m.—did not sit well with some groups.

Aylene Paguio of TNVS Organization Philippines said they were informed of the planned mass action just a few hours before it was publicly announced.

“We still have to convene our members. There’s a lot [at stake] here not only for the drivers, but also for the passengers,” she said.

However, Ninoy Mopas of Thugs Manila, another TNVS group, expressed confidence they would be able to rally the support of their members, including those who had already been accredited by the LTFRB.

“We’re still working out how exactly to carry this out. We also don’t want the riding public to be adversely affected by this, and also the drivers who rely on this to earn a living. But one thing is for certain, we will carry this out on Monday,” he said.

In a statement, Grab said that while it recognized drivers’ rights to free speech and assembly, they should also “show utmost restraint before taking actions that could negatively impact the ability of passengers to book rides.”

“Let us take the high road and not resort to any rash actions that would directly affect the passengers we are all committed to serve,” it added.

But Ariel Inton of the Lawyers for Commuters’ Safety and Protection also called out transport network companies (TNCs) like Grab for failing to help their driver-partners secure a franchise.

“If the TNCs are there to assist then I don’t see why TNVS drivers should have difficulties in complying with the requirements,” he said. “By helping them, this will also help the LTFRB in sorting out the requirements.”

According to Inton, they were mulling filing administrative liability charges against LTFRB chair Martin Delgra III for failing to take action on the 5,000 hatchback units deactivated early this month.

This was on top of the writ of mandamus filed recently, asking the Quezon City Regional Trial Court to compel the LTFRB to enforce Memorandum Circular No. 2018-25, which allowed hatchback vehicles to operate as TNVS units until 2021.