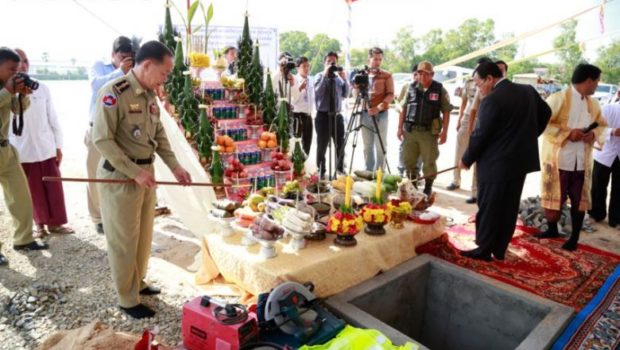 Prison Department officials and Interior Ministry officials participate in a groundbreaking ceremony to inaugurate a new private wing at Prey Sar prison in May 2017. PHOTO by Hong Menea via The Phnom Penh Post/Asia News Network

A prison official said on Wednesday that construction of Cambodia’s first privately run prison, which is set to allow prisoners with enough money to upgrade to more comfortable cells, is close to completion.

The $4 million project, a new wing of Prey Sar Prison in Phnom Penh, began in May 2017. It has been led by a private company, Kunn Rekon Holdings, on a 45-year build-operate-transfer agreement that will see the government and the firm sharing revenues.

Nuth Savna, General Department of Prisons spokesman, said on Wednesday that the construction of the new facility was almost complete, with only the connection of the drainage system, water and electricity remaining.

“The buildings are almost complete. We still need to check the technical standards and other minor details related to safety and security.”

“The technical team is checking the drainage system, the running water and electricity, as well as other technical aspects,” he said, adding that he did not know the date for the inauguration ceremony.

Savna said the new facility occupies 1.5ha in a complex measuring 3ha, and that he did not know how many rooms the prison would have.

Nonetheless, he said it would have a variety of rooms on offer including single and double rooms, and those housing three to four people.

“The rooms are not much different [from our current prisons]. There is a toilet and bed, but it has more space than a normal prison cell,” he said.

First announced in 2016, the new facility was billed at the time by Minister of Interior Sar Kheng as a “hotel or detention centre” that would provide better lodgings for inmates who could afford to pay for the upgrade, while at the same time generating revenue for the state.

Savna told The Post in 2017 that the prison would hold “400 people for the first phase”, with prices being “up to the company [based on] how much they want to charge”.

The notion of a two-tiered prison system, with prisoners of higher means able to upgrade their cells, has been a source of controversy since the project’s announcement.

Duch Piseth, advocacy officer at the Cambodian Center for Human Rights, told The Post in 2017 that designating areas within prisons as a “good space or bad space” inherently infringed on the rights and freedoms of all inmates, who should theoretically be treated equally.

Am Sam Ath, Deputy Director of Monitoring at rights group Licadho, said on Wednesday that the new prison had positive points, including its contribution to reducing overcrowding and easing the state’s financial burden in taking care of detainees.

However, he concluded that the “negatives outweigh the positives”.

“It creates discrimination, meaning those who committed the same crimes but have no money must squeeze into [a cell], but those who have money can stay in better conditions.”

“It seems to encourage those people [who have money to commit crimes]. Living comfortably in prison creates injustice and it encourages the rich and oknhas,” he said.

On Tuesday, Sar Kheng, who is Acting Prime Minister as Hun Sen is on an official visit to Europe, also held a meeting with ministry officials to talk about drafting a prakas on the governance of Prey Sar prison.

General Department of Prisons spokesman Savna said Sar Kheng had discussed prison management standards in relation to Article 10 of Cambodia’s Law on Prisons and also touched upon the construction of the new facility.

“[The meeting] was also about the new prison and correctional centres 1 and 2 [at Prey Sar],” Savna said, declining to go into detail on the draft prakas.

Article 10 of Cambodia’s Law on Prisons states: “The prison infrastructure shall comply with the minimum standards for prison construction as specified by the prakas of the Ministry of Interior.”

Ministry spokesperson Khieu Sopheak said the meeting also discussed potentially separating detainees who have been merely charged with those convicted of crimes and housing the two in different buildings.

“We would just [move them into] separate buildings, but they would still be jailed in the same Prey Sar prison . . . at the five-star Prey Sar prison,” he said.