FRANKFORT, Ky.  – A fire destroyed a massive Jim Beam warehouse filled with about 45,000 barrels of aging bourbon in Kentucky, and state officials worried that runoff whiskey seeping into nearby waterways would kill fish. 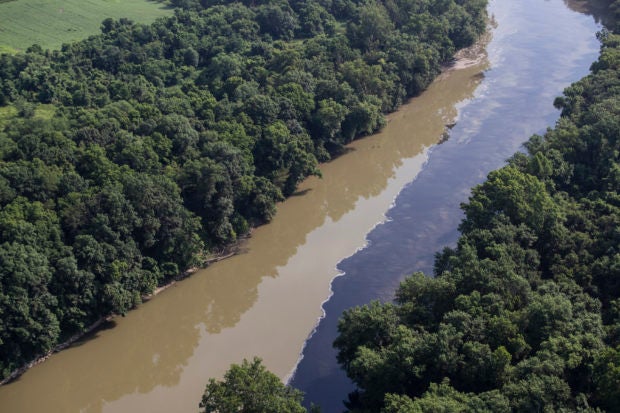 Bourbon mixes with water in the Kentucky River, Wednesday, July 3, 2019, following an overnight fire at a Jim Beam distillery in Woodford County, Ky. Firefighters from four counties responded to the blaze that erupted late Tuesday. (Pat McDonogh/Courier Journal via AP)

Firefighters from four counties responded to the blaze that erupted late Tuesday. It sent flames shooting into the night sky and generated so much heat that firetruck lights melted.

Lightning might have been a factor, but fire investigators haven’t been able to start looking for the cause, Woodford County Emergency Management Director Drew Chandler said.

The warehouse was a total loss. Looking to reassure consumers of Jim Beam bourbon, Beam Suntory indicated it amounted to a drop of the iconic brand’s total aging inventory.

No injuries were reported, Chandler said. The fire was contained but was allowed to burn until midday Wednesday, he said.

“The longer it burns, the more of the distilled spirits burn with it,” he said in a phone interview. “So when they go to put it out, there will be less contaminated runoff that goes into a drinking-water tributary.”

By Wednesday afternoon, firefighters were dousing the warehouse’s charred remains with water to try to extinguish the fire, Chandler said. 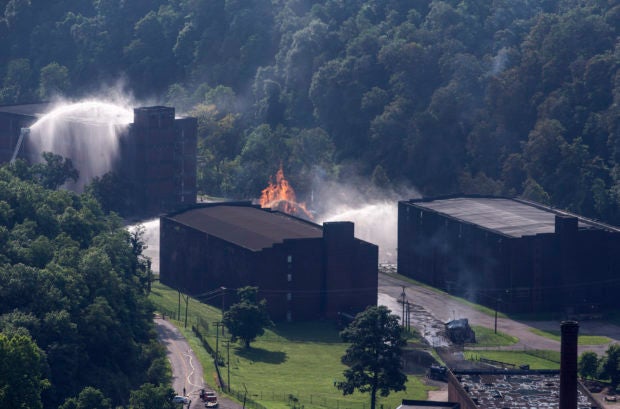 As they kept working, the focus turned to the environmental impact of the leaking bourbon.

The distiller hired an emergency cleanup crew and state environmental officials were coordinating efforts to control bourbon runoff into a nearby creek that flows into the Kentucky River, said John Mura, a spokesman for the Kentucky Energy and Environment Cabinet.

“We do know there has been runoff enter the creek,” Mura said. “And it has made its way into the Kentucky River.”

The runoff could have a “serious impact on aquatic life,” he said. Runoff is expected to create “low dissolved oxygen levels,” which could result in substantial fish kills, the agency said in a release.

State officials warned recreational users on the Kentucky River that runoff will result in water discoloration, foaming and an odor.

Beam Suntory officials said they are working with authorities to assess environmental effects.

The distilling company said the multi-story warehouse that burned contained “relatively young whiskey,” meaning it had not reached maturity for bottling for consumers. Bourbon acquires its color and flavor while aging for years in charred new oak barrels.

“Given the age of the lost whiskey, this fire will not impact the availability of Jim Beam for consumers,” the spirits company said in a statement.

The destroyed whiskey amounted to about 1% of Beam’s bourbon inventory, it said.

One standard bourbon barrel usually holds about 53 gallons of bourbon that eventually turns into around 150 to 200 750 milliliter bottles, the Courier Journal reported. If all the barrels held bourbon, that would be a loss of at least 6 million bottles, the Louisville newspaper reported.

The distiller said it was grateful to the “courageous firefighters” who brought the blaze under control and kept it from spreading. A second warehouse sustained minor exterior damage but its contents remained intact, the company said.

Authorities were alerted about the fire shortly after 11:35 p.m. EDT Tuesday, Chandler said. The orange glow from the inferno could be seen miles away, he said.

Firefighters who withstood the intense heat were able to keep the flames from spreading to some other nearby storage warehouses, he said.

“It melted lights off some of the firetrucks, it got so hot,” Chandler said.

The destroyed warehouse, near the Woodford-Franklin county line, was about 100 yards (91 meters) from Glenns Creek, a tributary of the Kentucky River, he said. Existing containment berms were reinforced with sand to try to prevent runoff into the creek, he said.

Beam Suntory officials said the distiller has a “comprehensive” warehouse safety program that includes regular inspections and “rigorous protocols” to promote safety. The distiller said it operates 126 barrel warehouses in Kentucky that hold about 3.3 million barrels for its brands.

The Beam fire was the latest warehouse loss suffered by a Kentucky distiller.

Last month, a storm caused the partial collapse of a warehouse at O.Z. Tyler Distillery in Owensboro. The painstaking process of recovering barrels is continuing as part of the distiller’s overall plan that included taking down the entire structure. /gsg