VATICAN CITY – One of a half-dozen men who have accused the Vatican’s ambassador to France of groping them said Wednesday he plans to take his legal complaint directly to the Vatican, alleging the Holy See had invoked diplomatic immunity for the high-ranking churchman in a French criminal probe. 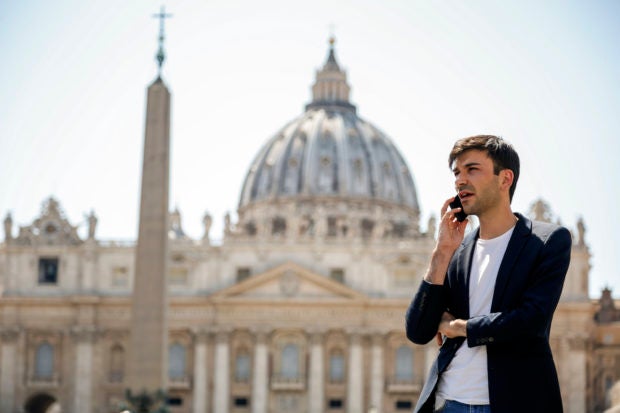 Mathieu De La Souchere speaks on his cellphone after an interview with The Associated Press in St. Peter’s Square at The Vatican, Wednesday, July 3, 2019. One of the half-dozen men who have accused the Vatican’s ambassador to France of groping them is taking his complaint directly to the Vatican after claiming the Holy See had invoked diplomatic immunity in a French criminal probe. Mathieu De La Souchere met with one of Pope Francis’ sex abuse advisers on Wednesday after filing a police report in Paris earlier this year. (AP Photo/Domenico Stinellis)

De La Souchere met with one of Pope Francis’ sex abuse advisers about the allegations Wednesday.

The Paris prosecutor’s office has opened an investigation into alleged sexual aggression.

The Vatican said Ventura was cooperating with the investigation. But De La Souchere said the French case was essentially stalled over the immunity question.

“The French government’s request to the Vatican to lift the diplomatic immunity remained unanswered,” he told The Associated Press.

De La Souchere said his lawyer plans to file a complaint with the Vatican City State’s criminal tribunal next week.

The tribunal largely follows the Italian penal code and is separate from the Congregation for the Doctrine of the Faith, which handles sex abuse-related crimes under the Catholic Church’s canon law.

“This new judicial step here in the Vatican, we hope, will be one more step toward the trial that we all the victims in France are waiting for,” De La Souchere said after meeting with the Rev. Hans Zollner, a founding member of the Pontifical Commission for the Protection of Minors.

De La Souchere met with Zollner and another man who has accused Ventura.

Catholic online site Crux has said as many as a half-dozen men have accused Ventura of unwanted groping over the course of his diplomatic postings, which have included Canada and Chile.

Ventura has repeatedly denied wrongdoing. His French lawyer, Bertrand Ollivier, did not respond to requests for comment Wednesday.

The archbishop’s whereabouts are unknown, but he attended a meeting at the Vatican last month of all the Holy See’s apostolic nuncios, or ambassadors.

Vatican spokesman Alessandro Gisotti said Ventura “has fully and voluntarily cooperated with French judicial authorities who are in charge of his case, and will continue to do so.” He didn’t immediately respond when asked about the status of Ventura’s immunity.

Ventura did agree to investigators’ request to take part in a “confrontation” with his accusers in May, according to French media reports. All accused him of putting his hands on their buttocks, sometimes repeatedly, or making other inappropriate gestures.

Speaking to one alleged victim, identified as Benjamin G., Ventura first claimed he didn’t remember the incidents in question and then said Benjamin misinterpreted his actions, according to French newspaper Le Monde.

The Vatican has previously recalled its diplomats when they get into trouble during overseas postings, as is common for governments with diplomats serving abroad.

In the most high-profile case, the Vatican recalled its ambassador to the Dominican Republic and prepared to put him on trial in the city state’s criminal tribunal for allegedly sexually abusing young boys. But he died before trial started.

More recently, the Vatican convicted a diplomat from its U.S. embassy for possession and distribution of child pornography and sentenced him to five years in prison.

The Vatican also invoked immunity during the recently-concluded trial in France that convicted French Cardinal Philippe Barbarin of failing to report an admitted pedophile to police. Also accused in the case was a Vatican official, Cardinal Luis Ladaria, who now heads the Vatican office in charge of handling sex abuse cases.

The Vatican invoked Ladaria’s immunity as a public official of a foreign sovereign — the Holy See — and he was not prosecuted. Barbarin enjoyed no such immunity as the archbishop of Lyon and was convicted and given a six-month suspended sentence.

Francis recently named a temporary administrator to run the Lyon archdiocese after Barbarin stepped aside pending his appeal. /gsg