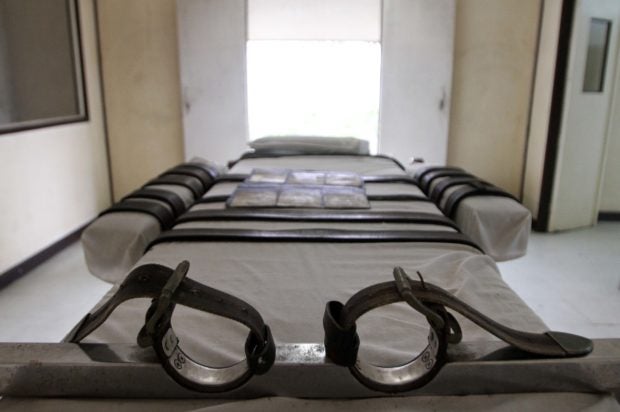 This October 10, 2014, shows the bed with thick straps that used to hold down a death row prisoner inside the Lethal Injection Chamber of the New Bilibid Prison in Muntinlupa City. Convicted rapist Alex Bartolome was the last person to be executed in this manner in the Philippines on January 6, 2000. INQUIRER PHOTO/LYN RILLON

MANILA, Philippines — Senators pushing for the reimposition of the death penalty should tackle their proposals “immediately,” Senate Majority Leader Juan Miguel Zubiri said Wednesday, citing the possibility of a drawn-out debate on the issue.

“I would suggest to the sponsors, they tackle it immediately upon assumption of the 18th Congress,” Zubiri told reporters in an interview.

He even suggested that bill proponents should already create a sub-committee and come up with a report for it to be tackled in the plenary.

Two senators have so far filed measures to reinstate the death penalty for heinous crimes.

Newbie senator Christopher “Bong” Go has sought for the reimposition of the death penalty for those involved in illegal drugs and plunder, among others, while Senator Manny Pacquiao’s version focuses on drug traffickers and manufacturers. (Editor: Katherine G. Adraneda)