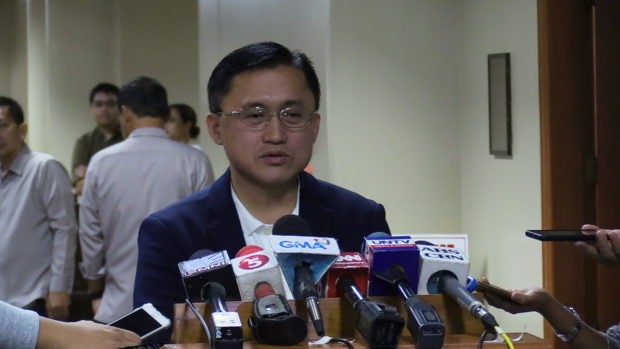 Senator-Elect Bong Go answers questions from the media after the orientation at the Senate on June 25. INQUIRER.NET PHOTO/CATHY MIRANDA

Under his proposal, the penalty of death shall be carried out through lethal injection. However, Go said he is still open to other suggestions for an apt mode of execution.

But Go said he is amenable to lowering the amount with which a person may be charged for plunder. Currently, the law set the minimum amount at P50 million.

Go expressed hope that his proposed measure will be approved in the 18th Congress “with the support of the Duterte administration.”

Moves to revive the death penalty failed in the 17th Congress, as the bill got stalled in the Senate. Its counterpart measure in the House of Representatives was swiftly passed in March 2017.

The first bill that Go filed upon assumption as a senator was a proposal to institutionalize “Malasakit Centers,” a one-stop shop for people needing medical and financial assistance from the government. Currently, there are 34 Malasakit Centers across the country.

Other bills he filed includes the creation of a department for overseas Filipino workers and a department on disaster resilience; amendment to the Solo Parents’ Welfare Act; introduction of National Housing Development Production and Financing Act; pay increase of government workers, including nurses and teachers; modernization of the Bureau of Fire Protection; and postponement of the barangay elections from May 2020 to October 2020.

He also filed a resolution for the creation of a Senate committee that will handle legislative concerns related to overseas employment, migrant workers, and the welfare and protection of overseas Filipino communities. (Editor: Katherine G. Adraneda)