8 arrested in Hong Kong for posting personal data on police 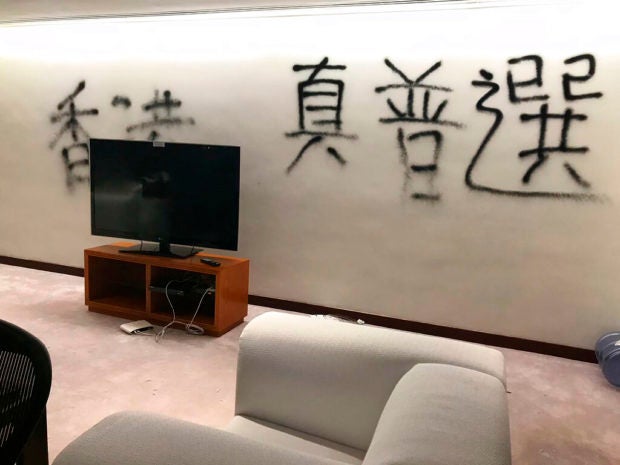 Damage to the lobby of the Legislative Council following a break-in by protesters is seen during a media tour on July 3, 2019, in Hong Kong. Characters read “Hong Kong needs real elections.” AP

HONG KONG — Hong Kong police have arrested eight people for posting personal data about police officers on the internet as massive protests against the government and police were held in recent weeks.

Officers and their family members have been threatened since their addresses and official ID card numbers were published, Superintendent Mohammed Swalikh of the Cyber Security bureau said in announcing the arrests Wednesday.

He did not say whether police believe the disclosures were related to the protests. Six men and two women were arrested.

Protests against a legislative proposal expanded to target the police as well after officers used tear gas and rubber bullets to disperse crowds blocking major city streets on June 12. Dozens were injured in the clashes, both protesters and police.

Protesters are demanding an independent investigation into the crackdown, which was harsher than usual for Hong Kong. Police have said it was justified after some protesters turned violent.

The legislative proposal would have allowed criminal suspects to be extradited to mainland China to face trial.

Opponents saw it as an erosion of the rights guaranteed to Hong Kong for 50 years after the return of the former British colony to China in 1997, and part of a broader attempt by China to clamp down on dissent in the semi-autonomous territory.

Hundreds of thousands marched in the largest protests in recent memory. Smaller protests blocked the legislature and major streets. The government eventually gave in, suspending debate on the bill, but protesters still want the legislation formally withdrawn and the resignation of Hong Kong leader Carrie Lam.

In Beijing, the Chinese government lashed back at remarks by British Foreign Secretary Jeremy Hunt on the causes of the anti-government protests in Hong Kong.

Foreign ministry spokesman Geng Shuang said Hunt appeared to be “basking in the faded glory of British colonialism and obsessed with lecturing others.”

Hunt had said that Hong Kong authorities should not use an outbreak of vandalism in the legislative chambers by protesters Monday night as a “pretext for repression.” He said the authorities need to “understand the root causes of what happened, which is a deep-seated concern by people in Hong Kong that their basic freedoms are under attack.”

Protesters broke into the legislature’s building, spray-painting slogans on the walls, knocking over filing cabinets and strewing papers and smashing portraits of legislative leaders.

Under a 1984 agreement between Britain and China, Hong Kong is to retain its Western-style economic, legal and political system for 50 years. But Geng said Britain has no authority to discuss matters in the territory. China considers such criticism to be interference in its internal affairs.

Geng noted that Britain restricted Hong Kong’s democracy during the colonial era. Hong Kong was under British rule for 155 years, during which it was run by a series of governors appointed by the British crown.

The protesters in Hong Kong are demanding direct election of the city’s leader.

“The UK considers itself as a guardian which is nothing but a delusion,” Geng said. “It is just shameless to say that Hong Kong’s freedoms are negotiated for them by the British side.”

China’s central government has voiced strong support for Lam and the city’s police in dealing with the recent protests. /ee