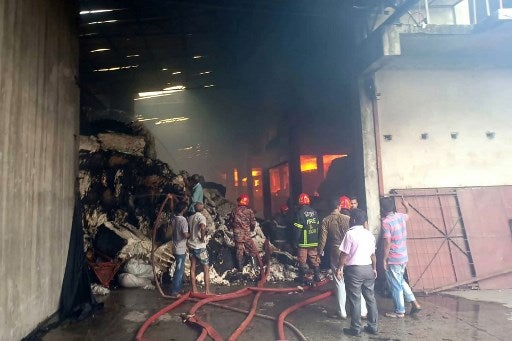 Bangladeshi firefighters and factory workers try to extinguish a fire in a textile factory in Gazipur on July 3, 2019. AFP

The fire brigade took 12 hours to control the blaze at the huge factory in Sreepur, near the capital Dhaka, which cast fresh attention on safety in Bangladeshi factories after a series of disasters.

The fire brigade said six bodies had been recovered.

With about half of the complex destroyed, emergency services were searching for other victims, Zaman added. Authorities have launched an inquiry into the cause of the blaze.

Bangladesh, the world’s second largest clothes maker after China, has faced international criticism over lax factory safety standards. The pressure intensified after the 2013 Rana Plaza disaster when a complex of factories collapsed, killing more than 1,100 people.

These organizations have either stopped their work or are about to leave, and rights groups say the government is not yet ready to enforce international standards.

The debate was raised again in March when a fire in a Dhaka office building killed 26 people. /ee