Rouhani: Iran will enrich uranium to ‘any amount we want’ 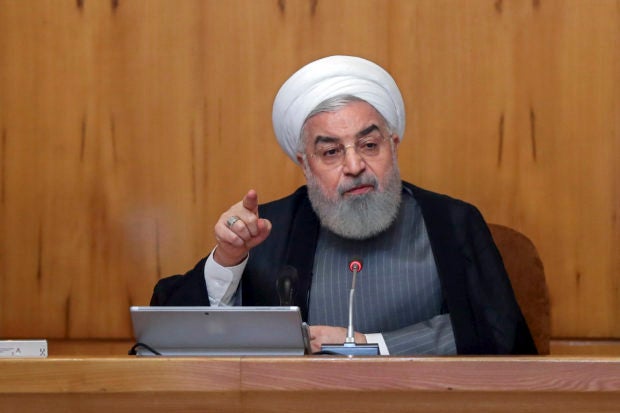 In this photo released by the office of the Iranian Presidency, President Hassan Rouhani speaks in a Cabinet meeting in Tehran, Iran, Wednesday, July 3, 2019. Rouhani warned European partners in its faltering nuclear deal on Wednesday that Tehran will increase its enrichment of uranium to “any amount that we want” beginning on Sunday, putting pressure on them to offer a way around intense U.S. sanctions targeting the country. (Photo from the Iranian Presidency Office via AP)

TEHRAN, Iran — Iran’s president warned European partners in its faltering nuclear deal on Wednesday that Tehran will increase its enrichment of uranium to “any amount that we want” beginning on Sunday, putting pressure on them to offer a way around intense U.S. sanctions targeting the country.

The comments by President Hassan Rouhani come as tensions remain high between Iran and the U.S. over the deal, which President Donald Trump pulled America from over a year ago.

Authorities on Monday acknowledged Iran broke through a limit placed on its stockpile of low-enriched uranium.

An increasing stockpile and higher enrichment close the estimated one-year window Iran would need to produce enough material for a nuclear bomb, something Iran denies it wants but the nuclear deal sought to prevent.

Meanwhile, the U.S. has rushed an aircraft carrier, B-52 bombers and F-22 fighters to the region and Iran recently shot down a U.S. military surveillance drone. On Wednesday, Iran marked the shootdown by the U.S. Navy of an Iranian passenger jet in 1988, a mistake that killed 290 people and shows the danger of miscalculation in the current crisis.

Speaking at a Cabinet meeting in Tehran, Rouhani’s comments seemed to signal that Europe has yet to offer Iran anything to alleviate the pain of the renewed U.S. sanctions targeting its oil industry and top officials.

Iran’s nuclear deal currently bars it from enriching uranium above 3.67%, which is enough for nuclear power plants but far below the 90% needed for weapons.

“Our advice to Europe and the United States is to go back to logic and to the negotiating table,” Rouhani added. “Go back to understanding, to respecting the law and resolutions of the U.N. Security Council. Under those conditions, all of us can abide by the nuclear deal.”

There was no immediate reaction in Europe, where the European Union just the day before finalized nominations to take over the bloc’s top posts.

On Tuesday, European powers separately issued a statement over Iran breaking through its stockpile limit, calling on Tehran “to reverse this step and to refrain from further measures that undermine the nuclear deal.”

Under the nuclear deal, Iran agreed to have less than 300 kilograms (661 pounds) of uranium enriched to a maximum of 3.67%. Both Iran and the U.N.’s nuclear watchdog agency confirmed Monday that Tehran had breached that limit.

While that represents Iran’s first major departure from the accord, it still remains likely a year away from having enough material for a nuclear weapon. Iran insists its program is for peaceful purposes, but the West fears it could allow Iran to build a bomb.

Meanwhile, on Wednesday, relatives of those killed in the 1988 downing of the Iranian passenger jet threw flowers into the Strait of Hormuz in mourning.

The downing of Iran Air flight 655 by the U.S. Navy remains one of the moments the Iranian government points to in its decades-long distrust of America. They rank it alongside the 1953 CIA-backed coup that toppled Iran’s elected prime minister and secured Shah Mohammad Reza Pahlavi’s absolute power until he abdicated the throne before the 1979 Islamic Revolution.

Just after dawn on July 3, 1988, the USS Vincennes sent a helicopter to hover over Iranian speedboats the Navy described as harassing commercial ships. The Iranians allegedly fired on the helicopter and the Vincennes gave chase, the Navy said. Unacknowledged for years afterward by the Navy though, the Vincennes had crossed into Iranian territorial waters in pursuit. It began firing at the Iranian ships there.

The Vincennes then mistook Iran Air flight 655, which had taken off from Bandar Abbas, Iran, heading for Dubai in the United Arab Emirates, for an Iranian fighter jet. It fired missiles, killing all 290 people on board.

The U.S. later would give USS Vincennes Capt. William C. Rogers the country’s Legion of Merit award, further angering Iran.
Iranian state television aired footage Wednesday of mourners in the strait, as armed Iranian Revolutionary Guard fast boats patrolled around them. They tossed gladiolas into the strait as some wept.