He also vowed to check the legality of building a cockpit arena there
By: Faye Orellana - Reporter / @FMOrellanaINQ
INQUIRER.net / 06:06 PM July 03, 2019 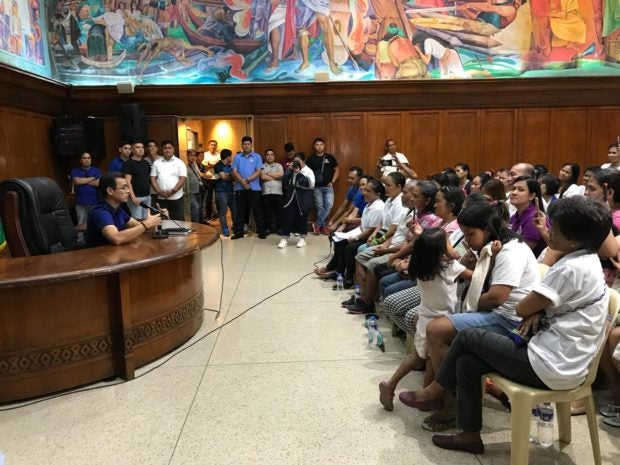 Manila Mayor Isko Moreno talks to residents of Vitas, Tondo on Wednesday, July 3, 2019, at Manila City Hall regarding the fate of their slaughterhouse, which is reportedly planned to be converted into either a casino or a cockpit arena. INQUIRER.net/Faye Orellana

MANILA, Philippines — Manila Mayor Francisco “Isko Moreno” Domagoso assured Vitas, Tondo residents that the place where their slaughterhouse once stood will not be turned into a casino.

He also assured residents that he will look into the legality of the planned construction of a cockpit arena there.

It was during the term of Mayor Joseph Estrada that the construction of a cockpit arena in Vitas was hatched.

Prior to his assumption into office last Sunday, Moreno visited Vitas and promised residents that he will revive the slaughterhouse and ensure measures will be undertaken to preserve the quality of meat being sold there. (Editor: Katherine G. Adraneda)

Read Next
Ungab to abide by HNP in speakership race
EDITORS' PICK
Digital hunt for Hyun Bin: 5 challenges for Smartees
Motostrada expands by handing over ‘Trident’ and adding new ‘Horseman’ to its growing business
House panel set to meet for possible decision on ABS-CBN franchise bid
No arrests to be made on 1st day of allowed pillion riding for couples — HPG
Water remains our saving grace right now
WHO: Indoor airborne spread of coronavirus possible
MOST READ
‘I will always speak up for you’: Server on defending Fil-Am family from racist rant
‘Nouveau’: Agot Isidro hits Jinkee Pacquaio’s show of luxury Hermes, Louis Vuitton bikes
Solon withdraws support for ABS-CBN franchise renewal
Ping Lacson: Duterte has no power to say who are terrorists
Don't miss out on the latest news and information.