US: Hong Kongers should be able to express views 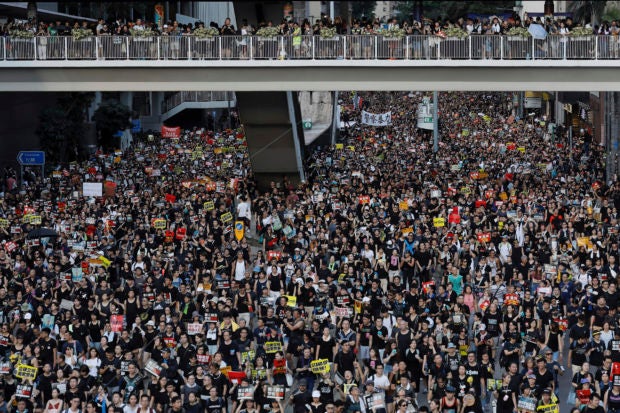 Protesters take part in a rally on Monday, July 1, 2019, in Hong Kong. Combative protesters tried to break into the Hong Kong legislature Monday as a crowd of thousands prepared to start a march in that direction on the 22nd anniversary of the former British colony’s return to China. (AP Photo/Vincent Yu)

HONGKONG — The U.S. consul in Hong Kong has condemned violence among government critics but also said all should have the right to express their views peacefully, including foreign residents with longstanding ties to the Asian financial hub.

Kurt Tong delivered his comments to an audience of hundreds of business and political leaders at a U.S. Independence Day celebration on Tuesday, saying Hong Kong had been through a “tough time” recently.

But he said the intentions of those seeking to bring change were good and Hong Kong has “the right ideas and the right values.”

He said the U.S. was disappointed to see the violence and vandalism at the Legislative Council building Monday night. But he said the U.S. would continue to voice its concerns about political and economic issues in the city.

Britain’s foreign secretary, meanwhile, said authorities in Hong Kong must not use an outbreak of vandalism during protests as a “pretext for repression.”

Jeremy Hunt says Britain has condemned the “violence on all sides” after hundreds of demonstrators stormed the Hong Kong legislature and daubed graffiti on the walls.

But he said authorities need to “understand the root causes of what happened, which is a deep-seated concern by people in Hong Kong that their basic freedoms are under attack.”

Britain is the former colonial power in Hong Kong, which returned to China in 1997. Hunt said Britain remained solidly behind the 1984 U.K.-Chinese declaration enshrining the “one country, two systems” principle of Hong Kong autonomy.

China’s foreign ministry earlier condemned the occupation and vandalization of Hong Kong’s legislature by pro-democracy protesters as “serious illegal acts that trample on the rule of law and endanger social order.”

Geng said Tuesday that China’s central government strongly supports Hong Kong’s government and its police force in dealing with the incident in accordance with the law. He also reiterated China’s rejection of any foreign nation commenting on or intervening in protest actions in Hong Kong, saying such matters are a purely Chinese affair and other countries “must not support any violent criminals in any form, and not send any misleading signals or take any erroneous actions.” /kga