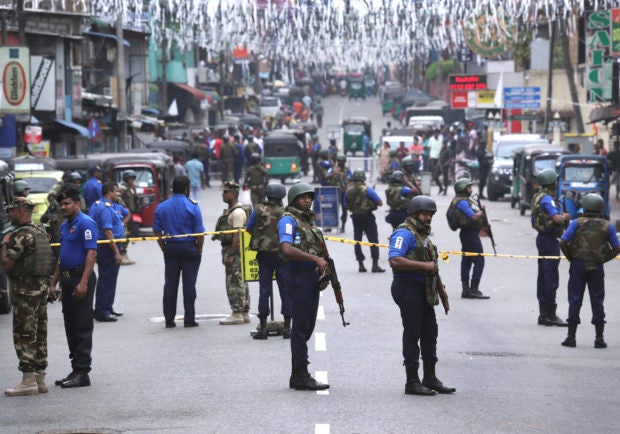 Sri Lankan Naval soldiers stand guard as authorities started clearing the debris from inside of the damaged St. Anthony’s Church after it was targeted in a series of Islamic State-claimed suicide bombings that killed hundreds of people during Easter Sunday, in Colombo, Saturday, April 27, 2019. Sri Lankan security forces have found 15 bodies, including six children, after militants linked to the Easter bombings set off explosives during a raid on their house in the country’s east. (AP Photo/Manish Swarup)

COLOMBO, Sri Lanka — Sri Lankan police on Tuesday arrested the country’s police chief, currently on compulsory leave, and its former defense secretary for alleged negligence leading to the Easter Sunday bombings that killed more than 250 people at churches and hotels.

Police spokesman Ruwan Gunasekara said former Defense Secretary Hemasiri Fernando and police chief Pujith Jayasundara were arrested at hospitals where they had been admitted. They remain in the hospitals under police custody, he said.

The arrests came a day after prosecutors asked the police to explain why they had not arrested the two former senior officials despite being instructed to do so.

The attorney general’s department said in a letter to acting police chief C.D. Wickremaratne on Monday that it had ordered Fernando and Jayasundara to be named as suspects and produced before a court because a presidential commission of inquiry found grounds to charge them with dereliction of duties and criminal negligence.

The letter said crimes the officials are suspected of having committed fall within “grave crimes against humanity” under international law.

Police had reportedly sought to question Fernando and Jayasundara but did not because they had been admitted to hospitals.

Fernando resigned after the blasts and Jayasundara was sent on compulsory leave.

Since the April 21 suicide attacks, the government has acknowledged it received intelligence reports about the plot beforehand but failed to act on them.

Fernando told the committee that Sirisena wasn’t easily accessible for discussions. Jayasundara said Sirisena asked him after the blasts to resign to take responsibility and promised he would have his name cleared in any subsequent inquiry.

Jayasundara also said Sirisena had asked him not to attend National Security Council meetings since last October when Sirisena fired Prime Minister Ranil Wickremesinghe in a power struggle that triggered a seven-week political crisis. Wickremesinghe was subsequently reinstated by the Supreme Court. /kga