MANILA, Philippines–Supreme Court Senior Associate Justice Antonio Carpio on Tuesday said that while there is no compulsory ground for him to recuse from the West Philippine Sea case, he opted to do so “for the peace of mind of the SolGen.” 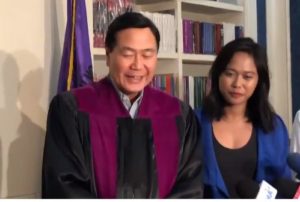 “There is no compulsory ground to inhibit but I voluntarily inhibited for the peace of mind of the SolGen,” Carpio said in a text message.

A source earlier said that the senior SC magistrate informed his colleagues during Tuesday morning’s en banc session that he will recuse himself from the case. His decision was accepted by the en banc. (Editor: Jonathan P. Vicente)