VIENNA – OPEC is extending its deal to cut production for another nine months in bid to keep oil prices from sagging as the oil cartel faces a weakening outlook for global demand.

The decision among the members of the Organization of the Petroleum Exporting Countries came during a meeting Monday at the cartel’s headquarters in Vienna. 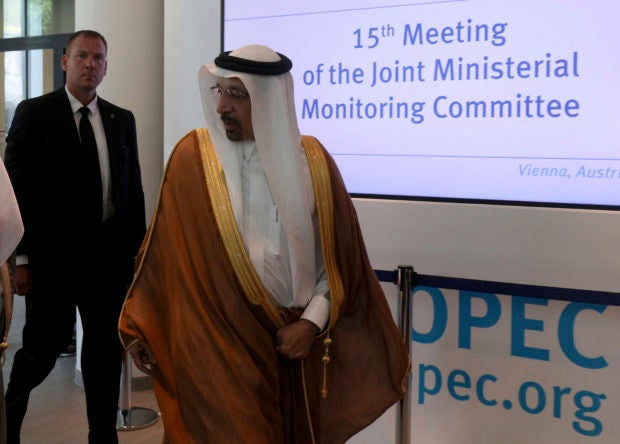 Khalid Al-Falih, Minister of Energy, Industry and Mineral Resources of Saudi Arabia arrives for a meeting of the Organization of the Petroleum Exporting Countries, OPEC, and non OPEC members at their headquarters in Vienna, Austria, Monday, July 1, 2019. (AP Photo/Ronald Zak)

He said he expected non-member producing countries such as Russia to join in extending the cuts at a separate meeting on Tuesday.

The current deal to support prices reduced production by 1.2 million barrels per day starting from Jan. 1 for six months, and will now run into next year.

Most of the cuts came from OPEC nations, who agreed to reduce 800,000 barrels per day, with the rest of the cuts coming from Russia and other non-OPEC countries, though not from the United States.

The cuts were aimed to put upward pressure on the price of oil and reduce oversupply.

“This more than compensates for whatever demand concerns that investors have been experiencing in recent months,” said Pavel Molchanov, energy analyst at Raymond James.

He noted that global demand could fall by 200,000 to 300,000 barrels per day but the OPEC cuts will reduce supply by about 1 million barrels per day.

Oil prices will likely increase over the next few months, but there are also many other variables besides OPEC that could impact the price, Molchanov said.

Though tensions between the U.S. and Iran and attacks on tankers near the Strait of Hormuz have pushed up oil prices in recent days, there are concerns among members that over the longer term demand could weaken due to slower global growth.

The price of Brent crude, the international standard, rose 32 cents Monday to $64.06 a barrel.

Geopolitical turmoil and production problems in various markets have led to concern that oil supply would be tight, conditions which tend to push the price of oil higher.

Tensions have been rising in the Middle East as the U.S imposed new sanctions on Iran, and oil tankers have been attacked near the Strait of Hormuz, a narrow passage through which a fifth of all oil traded around the world passes. And production out of Venezuela, once one of the world’s largest producers, has collapsed.

Experts say a military conflict between the U.S. and Iran would further constrain oil supply and send oil prices higher.

Yet the outlook for demand and prices has been weakening, not least because of the slowdown in the global economy partly as a result of trade tensions between the U.S. and China.

That raises the prospect of lower oil demand and consequently lower prices. The prospect of increased U.S. production of oil from shale deposits also hangs over the market. That could add to supply and weigh on prices, too. /gsg