HONG KONG – Hundreds of protesters swarmed into Hong Kong’s legislature Monday night, defacing portraits of lawmakers and spray-painting pro-democracy slogans in the chamber before vacating it as riot police cleared surrounding streets with tear gas and then moved inside. 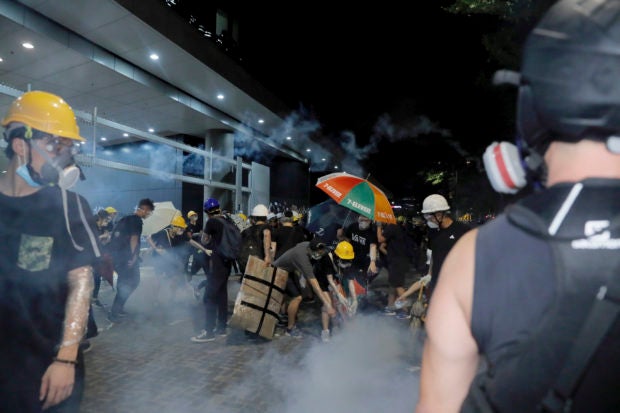 Protesters pour water on tear gas canisters at the Legislative Council in Hong Kong, during the early hours of Tuesday, July 2, 2019. Protesters in Hong Kong took over the legislature’s main building Friday night, tearing down portraits of legislative leaders and spray painting pro-democracy slogans on the walls of the main chamber.(AP Photo/Kin Cheung)

The three-hour occupation, which ended early Tuesday, came on the 22nd anniversary of the former British colony’s return to China, a city holiday, and reflected mounting frustration with Hong Kong’s leader for not responding to protesters’ demands after several weeks of demonstrations.

The protests were sparked by a government attempt to change extradition laws to allow suspects to be sent to China for trial.

Protesters whacked away at thick glass windows until they shattered and then pried open steel security gates. Police initially retreated as the protesters entered, avoiding a confrontation and giving them the run of the building.

Demonstrators stood on lawmakers’ desks and painted over the territory’s emblem on a wall.

The crowd also wrote slogans calling for a democratic election of the city’s leader and denouncing the extradition legislation. Many wore yellow and white helmets, face masks and the black T-shirts that have become their uniform.

Police then announced that they would soon move in. A spokesman had earlier broadcast a warning that “appropriate force” would be used.

Officers approached shortly after midnight and entered the legislative chambers after protesters had already left. There was no immediate word on any arrests or injuries.

The actions prompted organizers of a separate peaceful march against the extradition bill to change the endpoint of their protest from the legislature to a nearby park, after police asked them to call it off or change the route.

Police wanted the march to end earlier in the Wan Chai district, but organizers said that would leave out many people who planned to join the march along the way.

Police estimated 190,000 people joined the peaceful march, the third major one in as many weeks. Organizers estimated the number at 550,000.

The extradition proposal has heightened fears of eroding freedoms in the territory, which Britain returned to China on July 1, 1997.

Debate on the measure has been suspended indefinitely. Protesters want the bills formally withdrawn and Hong Kong’s embattled leader, Carrie Lam, to resign.

Lam, who has come under withering criticism for trying to push the legislation through, called a rare pre-dawn news conference with security officials at police headquarters. She noted that two different protests happened Monday — one a generally orderly march that reflected Hong Kong’s inclusiveness, the other using vandalism and violence.

“This is something we should seriously condemn,” she said.

She disputed protesters’ complaints that officials had not responded to them, saying the government explained that by suspending the bill with no timetable or plan to revisit it, the legislation would die at the end of the current legislative session in July 2020.

For the other demands, she said releasing arrested protesters without an investigation would not uphold the rule of law.

Lam’s first public comments came Monday at the handover anniversary ceremony, where she said the protests had taught her that she needs to listen better to young people and others. She insisted her government has good intentions and pledged that future work would be “closer and more responsive to the aspirations, sentiments and opinions of the community.”

Mainland China’s entirely state-controlled media made no mention of Monday’s protests. The main evening news broadcast carried video of the flag-raising ceremony, along with parts of Lam’s address and shots of Hong Kong residents praising displays put on by the People’s Liberation Army garrison in the territory. /gsg

Read Next
DND chief: Bombing raised extremism level
EDITORS' PICK
Heads may roll at BOC, says Palace if sugar smugglers are allowed to use recycled import permits
What to watch out for when selecting a video surveillance solution
Apple warns of flaw that lets hackers into iPhones, Macs
House energy committee chair Arroyo bats for cheap electricity
46% of schools nationwide to have full face-to-face classes on Aug. 22
vivo brings to the Philippines a powerful smartphone with a slimmer body, the vivo Y02s for only PHP 6,499
MOST READ
DepEd to give teachers P5K cash allowance within first week of classes
LOOK: Miel Pangilinan dazzles in glittery pre-debut shoot
DOJ indicts bank officer in $2.1 billion Wirecard fiasco
PH importing sugar after all: Marcos okays 150,000 MT
Don't miss out on the latest news and information.