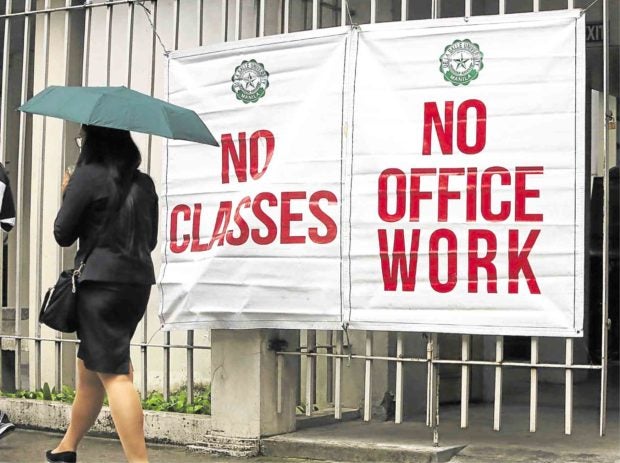 MANILA, Philippines — Manila Mayor Francisco “Isko Moreno” Domagoso on Monday dared the University of the East (UE) to move one of its campuses out of the city after it defied his order to suspend afternoon classes in all levels due to heavy monsoon rains.

“UE was the only one that defied [my] announcement,” Domagoso said on Facebook Live.

“If you are not going to obey the local government, and this goes out to all schools, better get out of Manila. Magsara na po kayo [You should shut down],” he added.

The new mayor of the country’s capital has often used live streaming as another means to reach out to the public.

Domagoso reminded the university that while education was important, the lives of its students mattered more.

“Students are not frogmen,” he said, adding that he had received reports that UE “always defied the orders of the city government.”

“Don’t tell us that you are under CHEd [Commission on Higher Education]… but mayors are responsible for the welfare of their constituents,” Domagoso pointed out.

The Inquirer called UE’s University Relations Office several times to get a comment but was unable to reach anyone.

Domagoso called out the university after it suspended classes only from Kindergarten to Grade 12 despite his order on Monday morning.

The city government’s announcement about the cancelation of classes in all levels was made at 9:49 a.m.

At 10:54 p.m., UE tweeted about the partial suspension of classes in its campuses in Manila and Caloocan City.

It revised its advisory at 12:58 p.m., announcing the cancelation of classes in all levels in the two campuses after students complained and Domagoso issued his warning.

“I hope you already learned your lesson. Never do that again,” Domagoso said. “I [will] let it pass this time.”

Days before his inaugural speech on June 30, he had reminded private schools in Manila that there was no such thing as “autonomous” when it came to the declaration of class suspensions due to bad weather.

He also asked for school officials’ cooperation on class cancelations, reminding them that the safety of students should be their priority.

“There’s no problem if they’re autonomous, but you want to be ‘autonomous’ at the expense of the… students, [Manila residents] and the people who will visit Manila?” he added.

Manila is home to some of the country’s leading universities and colleges. However, many parts of the city are prone to flooding during the rainy season, especially Taft Avenue and España Boulevard.

He pointed out there was nothing wrong if universities declared themselves autonomous. But autonomy, he said, would be no match against the Local Government Code.

“No such thing as ‘autonomous’ under Section 16 of the… code,” he added.