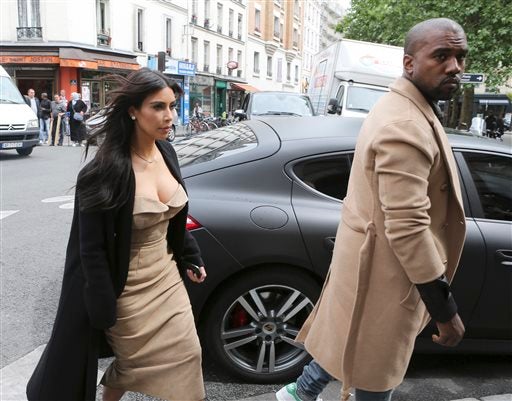 FILE – Kim Kardashian and U.S rap singer Kanye West arrive at a luxury shop in Paris, Wednesday, May 21, 2014 file photo. Recently, Kardashian West spoke about baby North, the success of her online game, her upcoming book of selfies and how motherhood has emboldened her. (AP Photo/Jacques Brinon, File)

The mayor of Japan’s ancient capital Kyoto has entered into an unlikely correspondence with the queen of selfies Kim Kardashian West, asking her to reconsider naming her shapewear line “Kimono”.

The American pop culture icon sparked a social media storm last week when she unveiled the new line, with some in Japan and abroad accusing her of disrespecting the traditional outfit.

And now the mayor has waded into the debate — being had on Twitter under the hashtag #KimOhNo — penning a letter to the star to ask her to reconsider, Kyoto officials told AFP.

“We’re concerned that a wrong understanding of kimono will spread since Ms. Kardashian is such a powerful influencer,” said Mai Sakai, a Kyoto city official in charge of traditional crafts.

“(I) ask you to reconsider your decision of using the name Kimono in your trademark,” Kyoto Mayor Daisaku Kadokawa wrote in an English-language letter sent to Kardashian West.

“Kimono is a traditional ethnic dress fostered in our rich nature and history,” he wrote, asking her to visit the city to experience kimono culture.

Kimono literally means “something to wear,” while Kardashian West’s use of it is a play on her first name.

The reality television star told the New York Times that she had no plans to produce clothes that “would in any way resemble or dishonor the traditional garment.”

Once a standard of the Japanese wardrobe, the kimono is now often reserved for special occasions, such as weddings and coming-of-age ceremonies, and is mostly worn by women.

And while the elaborate outfits might appear to have little in common with the snug garb being offered by Kardashian West, kimonos are not only often hugely expensive but known for being hard to wear.

Women frequently hire experts to dress them in kimono because the outfit requires seemingly endless nipping, tucking and strapping. CC

Kim K is actually trying to trademark ‘kimono’ for her products