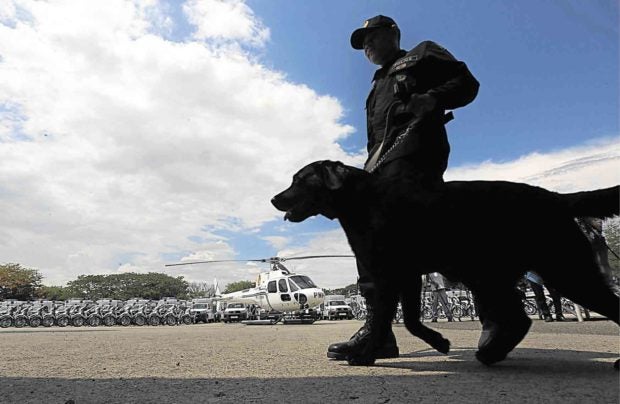 MANILA, Philippines — Although no terror threats were detected in Metro Manila, the entire force of the National Capital Region Police Office (NCRPO) was placed on full alert immediately after Friday’s suicide bombing in Sulu.

Maj. Gen. Guillermo Eleazar, the NCRPO chief, said the move which took effect at 6 p.m. on June 28 was a “proactive means in response to this terror attack.”

“Having this measure would be of great help in deterring unscrupulous individuals in carrying out their illegal or terroristic acts,” he stressed.

Under the full alert status, the NCRPO has mobilized its 29,000 policemen, assigning them to man checkpoints in strategic places and deploying them to places of convergence such as malls, parks, churches, airport terminals and train stations.

In addition, their leaves are canceled and their duty time is extended by 50 percent.

On Sunday, Eleazar said that the full alert status “[would] not necessarily be extended” until President Rodrigo Duterte delivers his State of the Nation Address on July 22.

“Once we [have] validated that we are safe here in Metro Manila, we shall lift [it],” he explained. The NCRPO shall then revert to the heightened alert status.

The Philippine National Police has three alert levels: normal, heightened and full under Command Memorandum Circular No. 18-2013 issued by then Gen. Alan Purisima, the PNP chief.

Under the heightened alert status, all leaves of police officers are canceled while their work hours are extended by 25 percent.

The NCRPO alert level has not gone down to normal since the September 2016 explosion at a night market in Davao City — the hometown of the President where he usually spends weekends and holidays — that killed 15 people.

The police were still coordinating with their military counterparts in investigating Friday’s suicide bombing at the headquarters of the 1st Battalion Combat Team, which was set up only last month at Barangay Kajatian, in Indanan town, Sulu province.

The international terrorist group Islamic State claimed responsibility for the attack which killed eight people and wounded 22 others.

It was the third suicide attack in the past 12 months. In January, two blasts ripped through a Catholic cathedral in Jolo, Sulu, killing at least 23 people. In July last year, 11 people were killed when a van exploded at a military checkpoint in Lamitan City, Basilan.