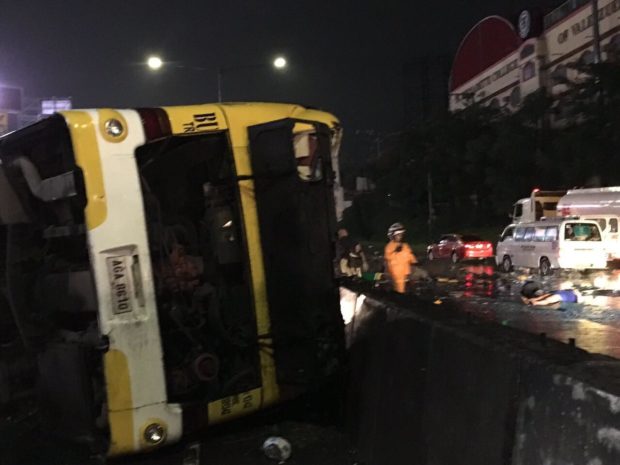 This bus fell on its side after hitting the rear of a van on NLEX on Friday, June 28, 2019. (Photo by GLORIA GALUNO)

MANILA, Philippines — The Land Transportation Franchising and Regulatory Board (LTFRB) on Sunday issued a preventive suspension order against the operator of a bus involved in a crash at the North Luzon Expressway (NLEX).

The suspension order was released against Buena Sher Transport, the owner of Del Carmen bus that crashed along the NLEX on Friday night, resulting int he death of at least eight people.

“A preventive suspension order has been issued to Buena Her Transport, owner of the Del Carmen Bus that was involved in the accident along NLEX Southbound on the evening of [June 29] that claimed the lives of eight passengers,” LTFRB said.

LTFRB is now investigating the incident and the liability of the bus company.

“If found guilty, Buena Sher Transport may face cancellation or revocation of its franchise,” the LTFRB said.

According to the authorities’ initial investigation, an Isuzu Crosswind van slowed down along NLEX due to heavy rainfall, causing the bus to slam into the rear of the van.

The bus then turned left before hitting a concrete median barrier and flipping on its side.

READ: 8 killed as bus flips on its side on NLEX