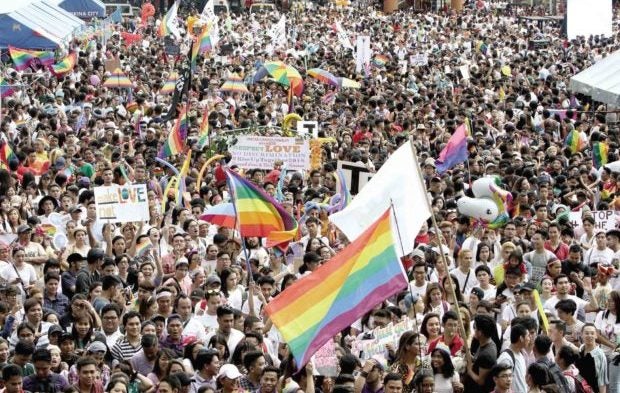 Members of the LGBT community gather for the 2018 Pride March in a show of solidarity at Marikina City Sports Complex. (File photo by RICHARD A. REYES / Philippine Daily Inquirer)

Marikina Mayor Marcelino Teodoro announced the enactment of the Anti-Discrimination Ordinance — or City Ordinance No. 065 — on Saturday during the 2019 Metro Manila Pride March and Festival held at the Marikina Sports Complex.

[To show support (for the LGBTQ+ community), I’m signing and enforcing today the Anti-Discrimination Ordinance which will give everyone equal rights to work, education, place of residence, and government services.]

Section 6 of the ordinance mandates the creation of an Anti-Discrimination Council. It will be composed of the mayor and other eight key city officials, three of which are representatives of the LGBTQ+.

Any person who would violate the ordinance would be penalized with not less than 60 days but not more than one year of imprisonment and/or a fine not less than P1, 000, but not to exceed P5, 000, or both atthe discretion of the court.

The move criminalizes the act of discrimination in the city, the mayor said.

[Nobody should be denied (rights) based on gender, place of origin, or faith.]

The ordinance, Teodoro noted, thus institutionalizes in his city what is proposed in the the Sexual Orientation, Gender Identity, and Expression (SOGIE) Equality Bill pending in Congress.

Read Next
Panelo: Filipinos ‘in awe’ of Duterte achievements
EDITORS' PICK
Villar blurts out expletive during Agri budget hearing
Delivering delight against all odds
Leaked: A 60x Zoom and all-new Helio G96 mean a complete overhaul for TECNO Mobile’s new CAMON 18 series
Nurses’ exodus: Hailed as heroes, treated like peons
The malady of food waste: Millions starve as trash bins fill with leftovers
Next level mobile photography within reach with vivo X70 co-engineered with ZEISS
MOST READ
Villar blurts out expletive during Agri budget hearing
‘Wala nang atrasan’: Pangilinan not backing out of VP race after ‘explosion’ of support
‘We are like hostages’: Pharmally exec ‘in hiding’ criticizes blue ribbon panel
In U.N. showdown over Xinjiang, China says ‘lies still lies’
Don't miss out on the latest news and information.