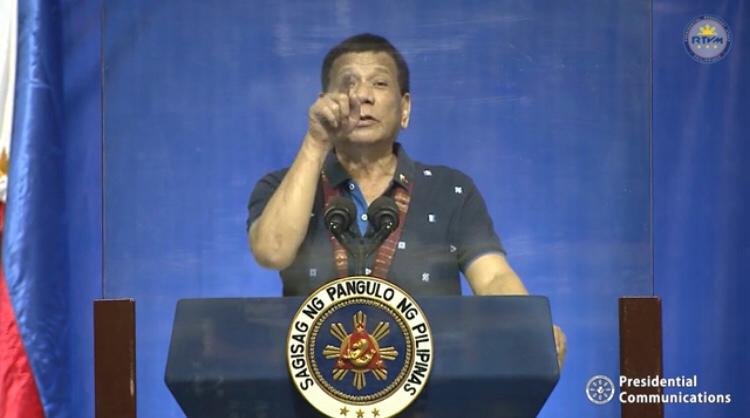 MANILA, Philippines—President Rodrigo Duterte’s threat to send to jail those who will file an impeachment complaint against him for allegedly violating the Constitution was a sign of guilt, a militant lawmaker said on Friday (June 28).

Critics of Duterte’s embrace of China warned that the President’s pronouncement that he would allow Chinese fishing vessels inside the Philippines’ exclusive economic zone was impeachable.

“He may have said those words because he’s guilty,” said ACT Teacher Rep. Antonio Tinio in an interview with ANC.

“It means he probably knows he makes certain statements of admissions that are clearly unconstitutional,” Tinio said.

The Makabayan bloc member said Duterte’s reaction was a repeat of his earlier remarks on accusations he committed “crimes against humanity” in waging a brutal campaign against illegal drugs.

Police have estimated up to 7,000 deaths of drug suspects but human rights groups claim the figure could be as high as 20,000.

“So what he is doing now is he is preempting an impeachment, by making these threats that anyone who files an impeachment complaint will be jailed,” Tinio said.

Tinio added that even this threat is unconstitutional and “highly undemocratic,” since any citizen has the right to file an impeachment complaint against the President.

He said any sitting President should respect this right.

Tinio added there was enough basis to impeach Duterte, following his admission that he entered into a deal in 2016 to let Chinese vessels fish inside the Philippines” exclusive economic zone.

Tinio, however, admitted that an impeachment case against Duterte is “highly unlikely” to prosper in the House because the President had a “supermajority” supporting him. (Editor: Tony Bergonia)

Read Next
After being shamed online for sleeping at workplace, homeless dad gets help from community
EDITORS' PICK
Get a chance to win 5G smartphones with Smart Signature Plans
BREAKING: COVID-19 variant from India now in the Philippines — DOH
Average new daily COVID-19 cases in NCR now less than 2,000 — OCTA
MMDA chair says easing of quarantine status in NCR should be gradual
PLDT Inc. Notice of Annual Meeting of Stockholders’ 2/2
Smart, MPTC introduce PH’s first toll top-up via mobile load
MOST READ
Duterte declares May 13 a holiday for Eid’l Fitr
Metro Manila, adjacent provinces to get bulk of AstraZeneca supply
Duterte: Jet ski promise just a campaign joke, stupid
Duterte defends backing out of debate with Carpio: ‘I’m not afraid of you’
Don't miss out on the latest news and information.