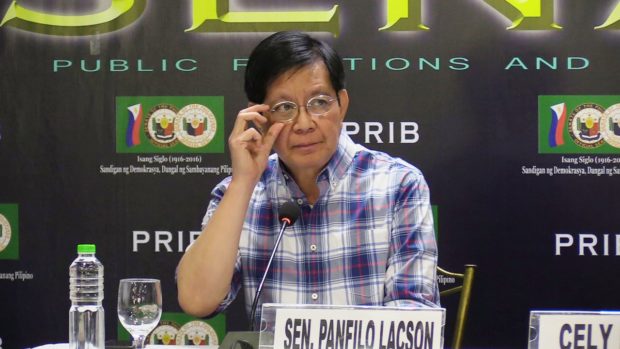 And what if senators are convinced by the evidence presented against the Chief Executive should an impeachment bid reach the Senate?

Senator Panfilo Lacson raised all these scenarios a day after the President threatened to jail those who would file an impeachment case against him over his alleged failure to protect the country’s territory.

“I-impeach ako? Kulungin ko silang lahat. Subukan niyo. Try to take it, do it, and I will do it,” Duterte said in an interview in Malacañang Thursday.

READ: Duterte on impeachment proponents: I’ll jail them all

Lacson, however, expressed doubt that Duterte will make his threat real.

“The President knows he can’t do it and he won’t do it,” he said in a text message on Friday when sought for comment on Duterte’s remark.

“His problem is when one third of the members of the HOR (House of Representatives) feel more challenged than afraid of his threat. A bigger problem is when 16 senators are convinced by the evidence presented during the trial,” he also said.

But of course, Lacson added, everything is hypothetical.

An impeachment complaint needs to get the support of one-third of House members to elevate it to the Senate, which will serve as an impeachment court, for trial.

The same number of votes – one third or 16 of the 24 senators – is also needed in the Senate to impeach the President.

Several lawmakers, including former Foreign Affairs Secretary Albert del Rosario,  earlier said Duterte may be impeached after he agreed with China to allow its fishermen to trawl within the Philippines’ economic exclusive zone.

Read Next
US Embassy in Manila closed on July 4
EDITORS' PICK
SM prepares for ‘safe malling’
Leveling up your ‘lutong bahay’ with the kitchen companion you never knew you needed
Notice of 2020 regular meeting of stockholders June 18, 2020
P2.2 trillion in losses: Cost of COVID-19 impact on PH economy
NBI, Immigration to join hunt for ‘underground’ medical clinics
2 Chinese nationals arrested in raid on another unlicensed COVID-19 hospital in Pampanga
MOST READ
Revillame tells Roque: ABS-CBN is in my heart despite being in rival network
NCR is ready for GCQ — Palace
LOOK: Robredo, Vico Sotto, check Community Mart ops in Pasig
Año: Quarantine passes not needed in GCQ, movement restricted to essential travel
Don't miss out on the latest news and information.