Duterte on impeachment proponents: I’ll jail them all 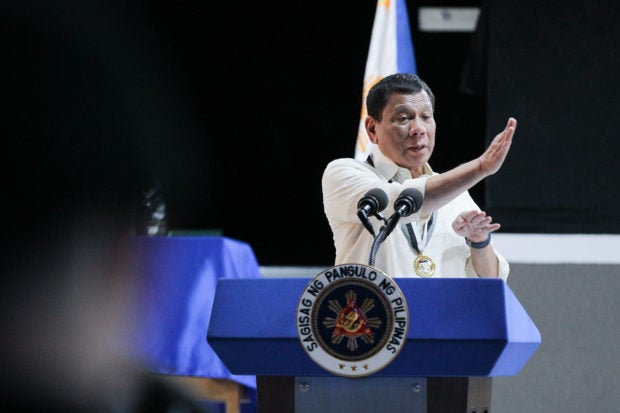 MANILA, Philippines—President Rodrigo Duterte on Thursday threatened to send to jail those who would file an impeachment case against him over his alleged failure to protect the country’s territory, especially its exclusive economic zone (EEZ), from Chinese aggression in the West Philippine Sea.

“I-impeach ako? Kulungin ko silang lahat. Subukan niyo. Try to take it, do it, and I will do it,” Duterte told reporters in Malacañang.

Several lawmakers, including former Foreign Affairs Secretary Albert del Rosario, were one in saying that Duterte may be impeached after he agreed to allow Chinese fishermen to fish in the Philippines’ EEZ.

According to Del Rosario, the Constitution states that the country’s EEZ is part of the territory that Duterte must protect.

Del Rosario was referring to Article XII Section 2 of the 1987 Constitution, which says that the government “shall protect the nation’s marine wealth in its archipelagic waters, territorial sea, and exclusive economic zone, and reserve its use and enjoyment exclusively to Filipino citizens.”

Earlier this week Duterte said China can fish along the country’s EEZ in the West Philippine Sea out of friendship.

“I don’t think China would do that (to stop fishing in Philippine territory). Why? Because we’re friends,” Duterte said on Monday.

READ: Out of friendship, PH will ‘tolerate’ China to fish in country’s EEZ – Palace

Malacañang earlier argued that the President’s move is not a ground for impeachment.

The President said he is not scared of being impeached over his handling of the incident and his remarks that China cannot be stopped from fishing in the country’s exclusive economic zone.

“You scare me with impeachment, son of a bitch just try doing it. Erap said you will end up losing to me. Just try me, try me. If you are a man and you are brave and have balls, do it, son of a bitch,” Mr. Duterte said on Thursday night.

He added: “If not, they are cowards. Do it. I’m the one sacrificing here… You want me to send soldiers to war and have them killed? How about their families? Will you pay for their pension?”

Mr. Duterte continued: “These fools, they are bright but they are not smart.”

The President made the remarks at the oath-taking of Sen. Christopher Go at Malacanang on Thursday night.

He was asked to comment on his detractors’ warning that he may be impeached over his remarks that China will not agree to be prohibited from fishing in the Philippines’ EEZ.

On Thursday night, the President maintained that the Philippines does need to give permission for China to fish in the country’s territorial waters because of its claims to the disputed waters.

“We do not need to give or disallow China because in the mind of China and everybody else, down to the last soldier and citizen, it is theirs,” Mr. Duterte said.

He added: “If I tell China, ‘Don’t do that.’ If I tell them not to do that, not to do this, they will do it. And you are there for an embarrassment. That is what these fools want, including (Supreme Court senior associate justice Antonio) Carpio.”

The President recalled how he sat down for a talk with Chinese President Xi Jinping to discuss the Philippines’ oil exploration in the West Philippine Sea, and how Xi warned him that asserting Manila’s claims “could mean trouble.”

He said China is willing to share but it was unlikely that it will agree to a 60-40 sharing scheme.

He added that the constitutional provision mandating the protection of the country’s marine wealth and territorial waters is a “provision for the thoughtless and the senseless.”

“That is a provision for the thoughtless and the senseless. The protection of our economic rights about the economic zone resolves this? I am protecting the country and 110 million Filipinos,” he said.

Mr. Duterte added that if he uses the 1987 Constitution to assert the country’s claims in the South China Sea, he would be only told “to use it as toilet paper.”

“I will go there, tell them to get out, this is the Constitution. They will tell me, you run out of toilet paper, use it. You present to me a Constitution like this and we have this ruckus claiming the same place in our jurisdiction,” he said.

“That means war. And that piece of paper, the Constitution, will become meaningless with no spirit except desperation, agony and suffering,” the President continued.

Mr. Duterte told his critics to “stay to their books” and “scholarly expositions.”

“Scholarly expositions… Don’t give me that shit. Stay to your books. I have to protect the interest of my country, the very life of the Filipino, 110 million,” he said.

He added that there was no other choice to assert Philippine sovereignty except to go to war.

“As it is now. Like all the other crisis, World War II, World War I, there was no remedy in sight. But God in His infinite wisdom will find the answer, not to give us the right to allow the slaughter of my countrymen,” he said.

He stressed that unlike China’s cruise missiles, the Philippines has nothing of the sort.

“We do not have that, so we shouldn’t brag. Do not be stupid. Unlike them, I dwell on reality,” the President said./ac