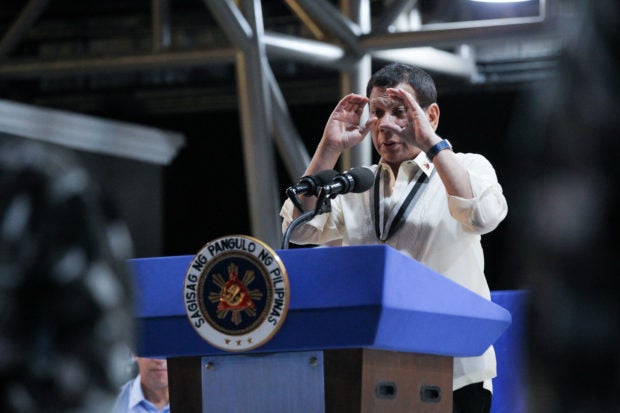 President Rodrigo Roa Duterte delivers his speech during the 122nd anniversary of the Presidential Security Group (PSG) at the PSG Compound on June 26, 2019. YANCY LIM/PRESIDENTIAL PHOTO

Presidential Spokesperson Salvador Panelo issued this statement after former Foreign Affairs Secretary Albert del Rosario said Duterte could be impeached for his failure to secure the country’s national territory, which includes the EEZ.

Duterte on Wednesday night said he had an agreement with Xi to allow China to fish in the Philippine EEZ after Beijing granted Filipino fishermen access to Scarborough Shoal.

“Kasi sabi ko – tanong sila, ‘Will you allow the Chinese to fish?’ Sabi ko, ‘Of course’,” the President said in his speech during the 122nd anniversary of the Presidential Security Group (PSG).

Panelo, who is also Duterte’s chief presidential legal counsel, said the President’s move is not unconstitutional.

“But you cannot stop the President from doing measures, steps that to his mind is the correct way to obey the constitutional command to him to protect and to serve the Filipino people,” he added.

Pressed if the Palace believed that what Duterte did was not an impeachable offense, Panelo said: “Definitely.”

Also during Wednesday night’s speech at the PSG anniversary, Duterte raised the question as to how he could stop Chinese ships from fishing in the Philippines’ EEZ.

Pressed further if the Philippines is now totally allowing China to fish in our EEZ, Panelo did not give a categorical answer and only said: “We will enforce the law.”

Presence of Chinese fishermen within the Philippines’ EEZ became a hot issue after a Chinese vessel rammed a Filipino boat at Recto Bank in the West Philippine Sea last June 9.

Recto Bank is part of the Philippines’ 200-nautical mile EEZ.

Duterte has said he and his Cabinet agreed that the Filipino boat was “sideswiped” and was not rammed by the Chinese trawler.

Panelo also mentioned it was uncertain if the Chinese vessel was fishing in Recto Bank.

But he assured that the government would prosecute Chinese fishermen if they are seen fishing there.

“We will prosecute,” he said.

This is a stark contrast to Duterte’s statement saying the Chinese fishermen are allowed to fish in our local waters as part of his mutual agreement with China’s Xi.

“Tapos ‘yang diyan, sabi nila, ‘Would you allow the fishermen to fish? Of course.’ That was our agreement,” Duterte said.

So, is Duterte now allowing China to fish within the Philippines’ EEZ?

“The policy of the President precisely is meron na silang usapan doon the first time he made the visit. Kaya hindi siya worried doon. Kaya sinasabi niya, they will not do that because we’re friends. May commitment sila, eh. Parang walang gulo,” he said.

“Ang hindi naiintindihan ng mga kritiko, he’s trying to avoid potential situations that will lead to something na we will regret,” he added.