German police cautioned a man riding naked on a moped while tempers flared over topless sunbathers in Munich, as temperatures soared in a sizzling heatwave across the country.

Police in Brandenburg posted on Twitter two pictures of a moped-riding man clad in only his helmet and sandals, as they called on netizens to suggest captions for the images. 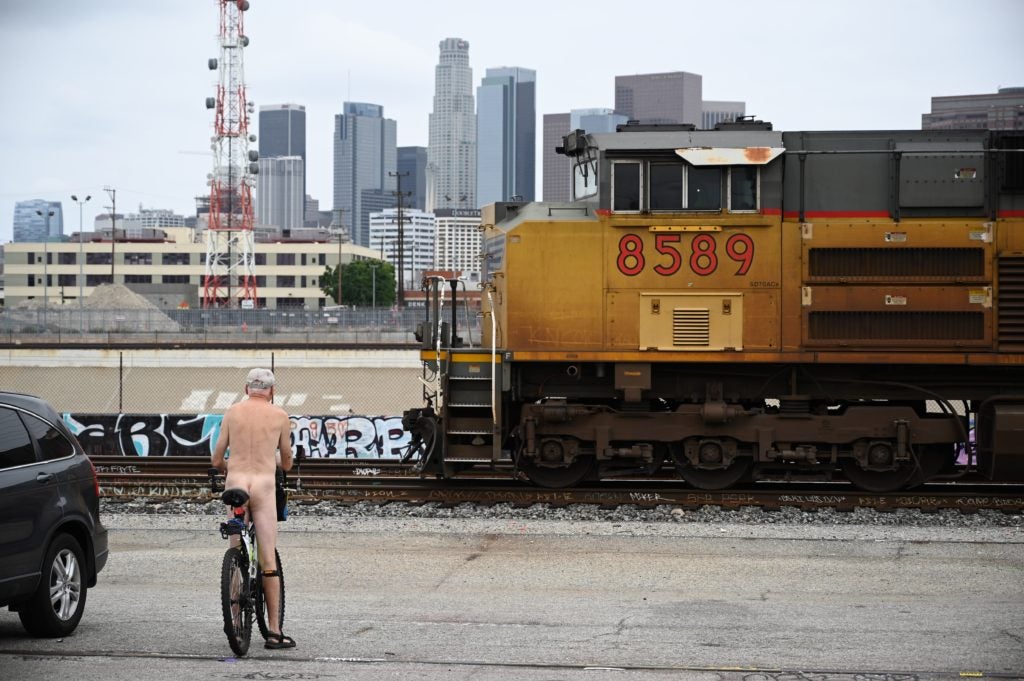 A lone rider watches a train go by as he waits for the start of the World Naked Bike Ride in Los Angeles, California on June 22, 2019.  Image: AFP/Robyn Beck

As contributions and queries poured in over whether the man flouted any rules, police clarified that it was not illegal to go around nude in public, but only so long as no one files a complaint.

In the south of the country, some female sunbathers who went topless at Munich’s Isar river touched off a row as five fully-clad security men walked over to tell them to put their bikini tops back on, Süddeutsche Zeitung reported.

Several other sunbathers nearby stood up for the women, with one telling the newspaper, “We took off our bikinis out of solidarity.”

With debate over the incident that took place over the weekend heating up, the Greens party brought the issue to Munich’s city council.

“For me, it’s incomprehensible if men can lie in the sun topless but not women,” said Dominik Krause, among the initiators of the council debate.

The Christian Social Union, conservative Bavarian allies of Chancellor Angela Merkel, took another view, and instead tabled an urgent motion Wednesday, June 26, requiring bathers to put on “swimwear that completely keeps their main sex organs covered” unless in an area specifically designated for nudists. RGA/JB

Naked cyclists on a roll for healthy transport in Mexico City