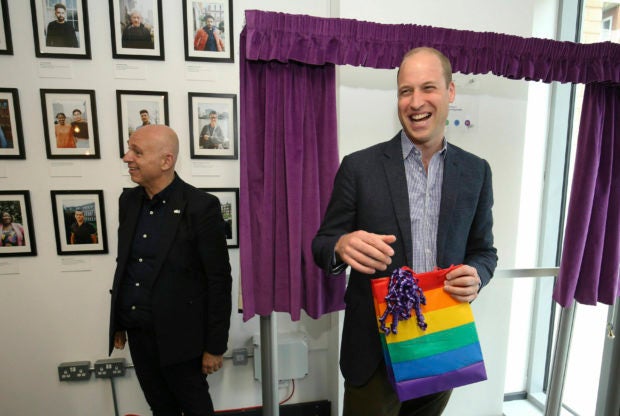 Great Britain’s Prince William reacts to receiving a gift bag from trust chief executive officer Tim Sigsworth, during a visit to the Albert Kennedy Trust to learn about the issue of LGBTQ youth homelessness and the unique approach that the organization is taking to tackling the problem. Image: Pool Photo/Jonathan Brady via AP

Great Britain’s Prince William said it would be “absolutely fine” if one of his children came out as gay although he would worry about how the public would respond.

William made the comment last Wednesday, June 26, while visiting a London nonprofit group that works with young LGBT people who are homeless or living in hostile environments.

A participant in a group discussion at the Albert Kennedy Trust asked him, “If your child one day in the future said, ‘Oh I am gay, oh I am lesbian’ whatever, how would you react?”

William replied that would be “obviously, absolutely fine by me.”

The father of three said, “It worries me not because of them being gay. It worries me as to how everyone else will react and perceive it, and then the pressure is then on them.” HM/JB