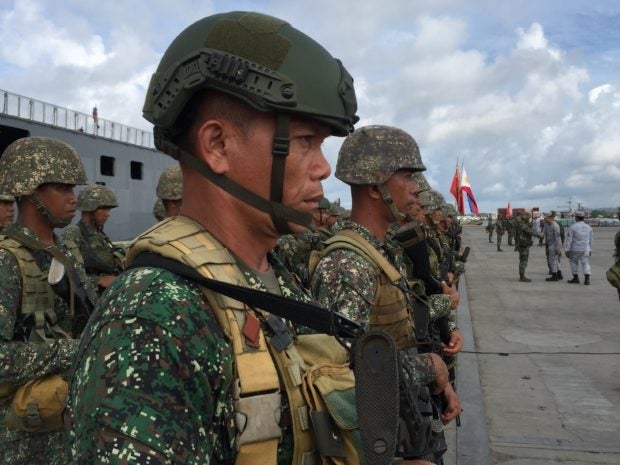 A battalion of marines is for deployment to Western Command in Palawan. Marine Battalion Landing Team 3 from Sulu, left for Palawan on Thursday morning. @alipalajulieINQ

ZAMBOANGA CITY, Zamboanga del Sur – A battalion-sized war-tested Philippine Marines was pulled out from Sulu to augment the Armed Forces’ Western Command (Wescom) based in Puerto Princesa City, Palawan that dubbed itself as the “protector of the West Philippine Sea.”

Lt. General Arnel Dela Vega, commander of Western Mindanao Command (Westmincom), saw the deployment of MBLT 3 to Palawan as a “milestone” in the history of the Philippine Marines “because you are chosen to join in our quest for sovereignty in that part of our country.”

Dela Vega, speaking during his last day as commander of Westmincom, was optimistic that the Marines would perform well in Wescom, beyond what they have accomplished in Sulu in the last three years. (Dela Vega will officially retire from the military service on Friday and will turn over the Westmincom to Maj. Gen. Cirilito Sobejana on Friday afternoon.)

“I have personally witnessed the dedication, the competence and the successful accomplishment of the MBLT 3 in Sulu. I have no doubt in your competence in warfighting. It will again be put to test,” Dela Vega said.

The Western Command is active in combating terrorism and insurgency, given the presence of armed groups, including the Abu Sayyaf and New Peoples’ Army, in the island-province.

Wescom’s coverage also includes guarding the West Philippine Sea, a portion of the South China Sea that belongs to the Philippines, the Kalayaan Island, and the disputed Spratly Island. 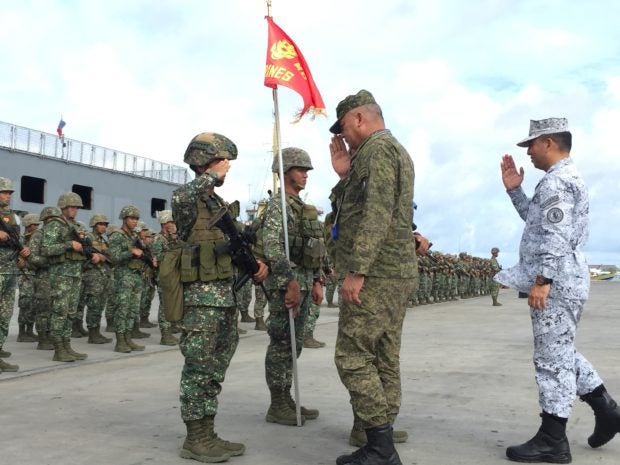 Lt. General Arnel Dela Vega, commander of Western Mindanao Command led in the sending off ceremony at the port of Zamboanga. @alipalajulieINQ

Dela Vega advised the Marines to “take first a respite from your long duties in Sulu and start anew with your posturing in Western Command.”

Rear Admiral Erick Kagaoan, commander of Naval Forces Western Mindanao said MBLT3 has been one of the most decorated units in Sulu.

He cited the accomplishments they achieved, to include the rescue of 10 kidnap victims in separate instances last year.

“This battalion was instrumental in the rescue of ten kidnap victims, eight Filipinos, one Malaysian and one Indonesian,” Kagaoan noted.

This “resulted to the confiscation and apprehension of a total of 115 assorted high powered firearms, 76 assorted magazines and clips, 868 assorted ammunition,” he added.

They were also instrumental in the surrender of 39 personalities, 24 of whom were former Abu Sayyaf Group fighters.

“They are tamed but fierce and we are confident that they can perform well in their new assignments in Palawan,” Kagaoan said. (Editor: Leti Boniol)