Estrada hosts party as he steps back from public service 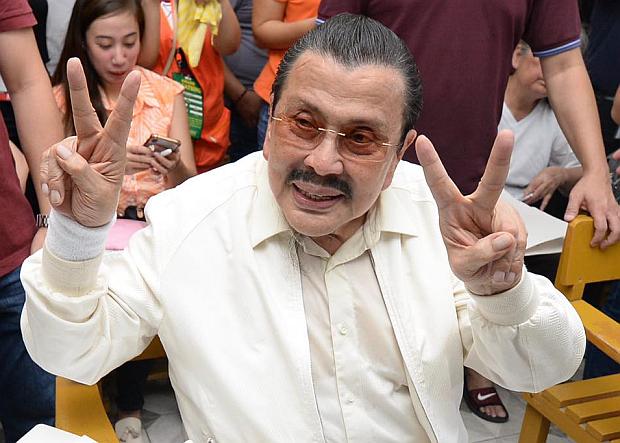 MANILA, Philippines — Outgoing Manila Mayor Joseph Ejercito-Estrada on Wednesday bid farewell to public service — at least, for the time being — after losing in the May mayoralty race in the national capital.

At his thanksgiving party at the Sofitel Philippine Plaza in Pasay, he said that respected the decision of the residents of Manila after he lost to Francisco “Isko Moreno” Domagoso by over 100,000 votes.

“As an outgoing mayor mayor of Manila, you have been the source of my strength and dedication. Kayo ang nagbigay sa akin ng lahat. I now bid you farewell for now and I take a step back from public service. The people have spoken and I respect them,” Estrada said.

However, Estrada admitted that he did not expect to end his reign as Manila mayor only on his second term.

Despite this loss, Estrada pledged that his “devotion to the city of Manila will remain.”

“Hindi man tayo pinalad, my devotion to the city of Manila will remain,” Estrada said. “I’ve done my best I only do what’s best for the greater good of the greater number.”

Moreno earlier paid a courtesy visit to Estrada at the Manila City Hall – the first time they met since the 2016 elections.

During their meeting, the two vowed to work for a smooth transition of power.

Moreno is set to take his oath as Manila’s chief executive on June 30.

Read Next
‘Dodong’ exits PAR but monsoon rains to continue
EDITORS' PICK
The Najima Drive: Nissan’s MD drives #GoAnywhere adventures in new video series
Can travel make you fall in love?
COVID-19 screening checkpoints remain for those going to Boracay
Can Your Brand of Meat Be Trusted? Here’s How to Know You’re Eating Safe Meat
COVID-19 has infected more than 69,000 people globally
Xi’s early involvement in virus outbreak raises questions
MOST READ
SC should have final say on VFA – Lacson
WATCH: Sarah Geronimo dances ‘fierce’ version of ‘Tala’
2,000 iPhones given for free by Japanese gov’t to passengers stuck on ship due to coronavirus
Año insists narcolist is reliable
Don't miss out on the latest news and information.