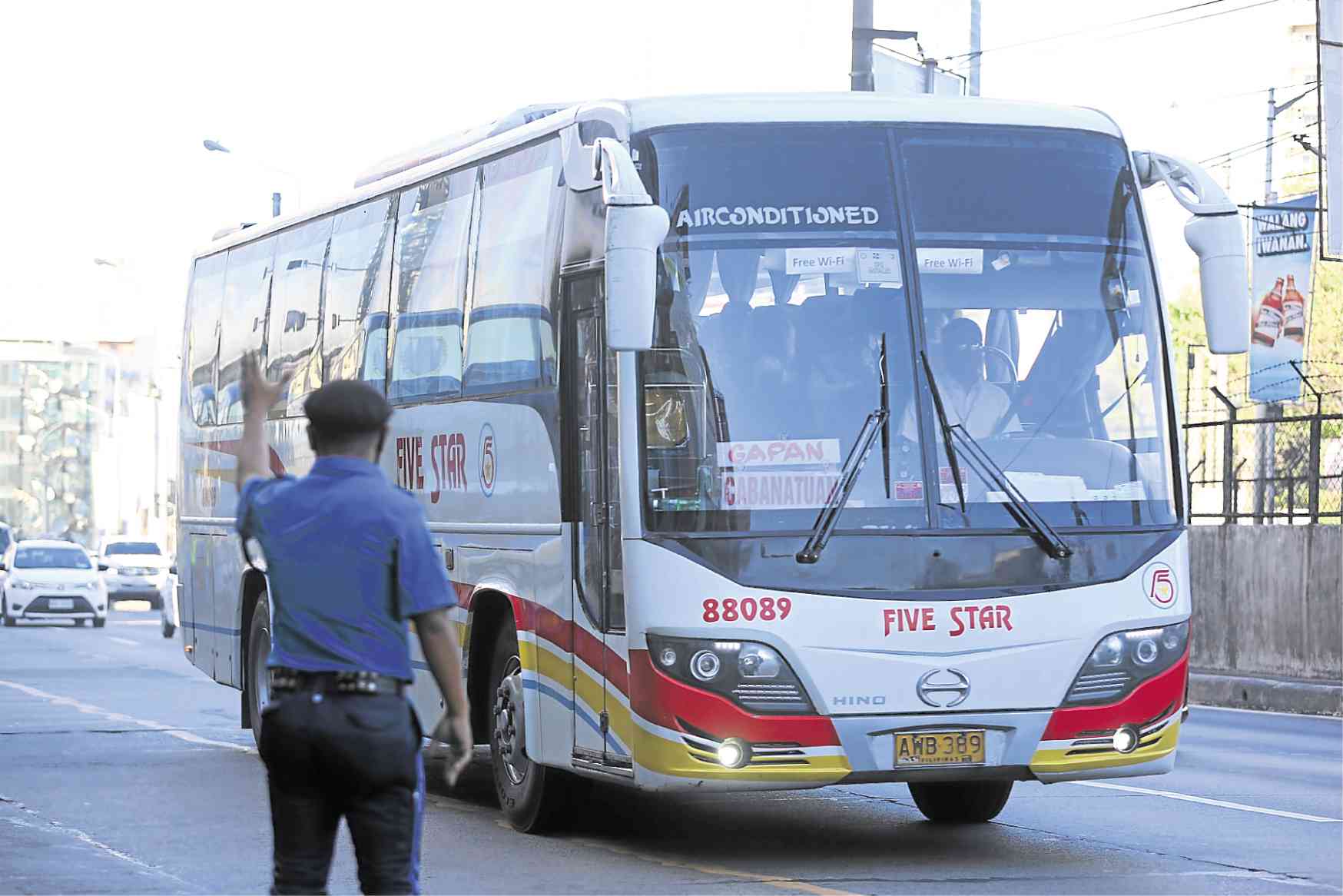 LEGAL ROAD BLOCK The MMDA says its June 30 target for the ban’s implementation may not be met. —NIÑO JESUS ORBETA

MANILA, Philippines — Chances of implementing the controversial ban on provincial buses before the end of June have dimmed due to still-unfinished guidelines and legal hurdles, a Metropolitan Manila Development Authority (MMDA) official admitted on Wednesday.

While the MMDA stands by its pledge to eventually implement the policy, it is not confident it could roll it out before its self-imposed deadline on June 30, Bong Nebrija, the agency’s traffic chief, said.

The plan requires provincial buses to end their trips at interim terminals on the fringes of Metro Manila.

“I don’t think [we can do it] with only a week left. So right now, we’re all about [not rushing] it,” Nebrija said without giving a definite timeline.

The MMDA is still working with the Land Transportation Franchising and Regulatory Board (LTFRB) in ironing out the guidelines governing the ban’s implementation, something that critics said should have been completed even before the agency held a dry run for the ban earlier this year.

The plan includes the shortening or lengthening of certain city and provincial routes for all public utility vehicles to make transfer trips easier for commuters.

Changes to the transport fare matrix should also ensure that these extra trips remain affordable, the MMDA said.

Meanwhile, the MMDA is still preparing the interim terminals in Valenzuela and Santa Rosa City, Laguna province, where the provincial buses are required to end their trips.

The agency is still conducting public consultations with bus owners, commuters and other affected sectors to strengthen policy direction.

Nebrija said that once these preparations had been completed, it would be “just a matter of time before we can implement” the provincial bus ban.

But the possibility of a temporary restraining order from the courts could still delay the MMDA plan to decongest major Metro Manila streets.

On Tuesday, the Supreme Court ordered the agency to reply within 10 days to a consolidated petition filed by various commuter and transport groups questioning the legality of the bus ban.

The petitions argued that the MMDA had no legal basis for such a policy, which would also revoke the business permits of provincial bus terminals along Edsa.

Nebrija said the agency was coordinating with the Office of the Solicitor General so it could properly reply to the petitions.

“There’s really no [court] resolution to stop us,” Nebrija said. “So we’re preparing. We’re using this time to implement [the policy].”

Read Next
Former No. 2 of Davao police region takes over as EPD chief
EDITORS' PICK
PH to send 584 athletes, 161 officials to Vietnam SEA Games
Gear up and get ready to play with Yamaha Mio Gear
SSS: Members on home quarantine due to COVID-19 can apply for sickness benefit
Acer starts the year off strong with the Aspire Vero National Geographic Edition
Kalinga, Ifugao, Mt. Province, N. Samar will be under Alert Level 4 from Jan 21-31
Mobile COVID-19 vaccination for commuters, transport workers set at PITX
MOST READ
Imelda Marcos trends on Twitter after octogenarian jailed for allegedly stealing mangoes
Mayor Vico counters vice mayor: ‘Did I say anything about his family?’
Municipal court in Pangasinan sets arraignment for ‘Lolo Narding’
Villar backs implementation of EDSA decongestion blueprint
Don't miss out on the latest news and information.