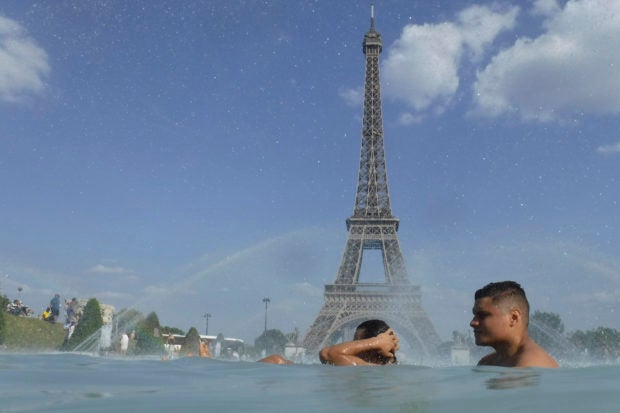 People cool off in the fountain of the Trocadero, as the Eiffel Tower is visible in background, in Paris, Tuesday, June 25, 2019. Authorities warned that temperatures could top 40°C (104°F) in some parts of Europe over the coming days, the effect of hot air moving northward from Africa. French Health Minister Agnes Buzyn said more than half of France is on alert for high temperatures Tuesday and the hot weather is expected to last until the end of the week. (Photo by ALESSANDRA TARANTINO / AP)

BERLIN — A swath of western and central Europe is sweating under blazing temperatures, with authorities in one German region imposing temporary speed limits on some stretches of the autobahn as a precaution against heat damage.

Authorities have warned that temperatures could top 40°C (104°F) in some parts of the continent over the coming days.

The transport ministry in Germany’s eastern Saxony-Anhalt state said Wednesday it has imposed speed limits of 100 kph or 120 kph (62 mph or 75 mph) on several short stretches of the highway until further notice. Those stretches usually have no speed limit.

On Tuesday evening, German railway operator Deutsche Bahn called rescue services to Duesseldorf Airport station as a precaution because two trains’ air conditioning systems weren’t working properly, but neither had to be evacuated.