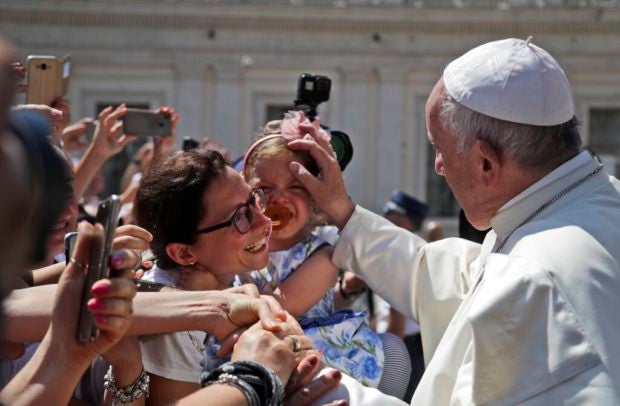 Pope Francis blesses a child during his weekly general audience in St. Peter’s Square, at the Vatican on June 26, 2019. AP

VATICAN CITY — Pope Francis has complimented the people of Mexico during his weekly audience, praising them for being “so welcoming to migrants. God bless you.”

A group of Mexicans present in St. Peter’s Square for the Wednesday audience cheered and waved a Mexican flag at the comments.

Francis has frequently been vocal in his support of Mexico’s efforts to help migrants and critical of the United States for blocking migrants at the border. During a visit to the U.S.-Mexico border in 2016, he criticized then-presidential candidate Donald Trump, suggesting that anyone who wanted to build a wall along the border was “not a Christian.”

In April, the pontiff donated $500,000 to help migrants in Mexico, offering assistance to local projects that provide food, lodging and basic necessities. /ee