WASHINGTON — As Democratic presidential hopefuls prepare for their first 2020 primary debate this week, over 70 medical and public health groups aligned on Monday to push for a series of consensus commitments to combat climate change, bluntly defined by the organizations as “a health emergency.”

The new climate change agenda released by the groups, including the American Medical Association and the American Heart Association, comes amid early jostling among Democratic candidates over whose environmental platform is more progressive. The health organizations’ policy recommendations, while a stark departure from President Donald Trump’s approach, represent a back-to-basics approach for an internal Democratic climate debate that has so far revolved around the liberal precepts of the Green New Deal.

“The health, safety and well-being of millions of people in the U.S. have already been harmed by human-caused climate change, and health risks in the future are dire without urgent action to fight climate change,” the medical and public health groups wrote in their climate agenda, shared with The Associated Press in advance of its release.

Among other things, the groups are pressing elected officials and presidential candidates to “meet and strengthen U.S. commitments” under the 2015 United Nations climate agreement from which Trump has vowed to withdraw. They’re also pushing for some form of carbon pricing, although without any reference to potential taxation of emissions, and “a plan and timeline for reduction of fossil fuel extraction in the U.S.” 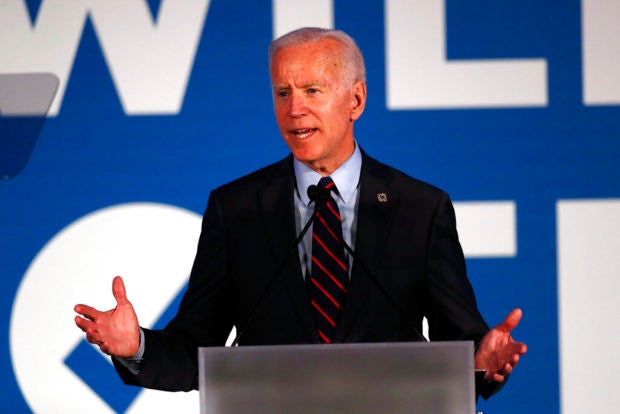 While the groups call for a reduction in petroleum and natural gas use in transportation, they do not go as far as several of Biden’s rivals in supporting an outright ban on the oil and gas extraction technique known as hydraulic fracturing, or fracking, which involves injecting high-pressure mixtures of water, sand or gravel and chemicals into rock.

Other groups signing onto the list of climate policy priorities include the American Lung Association, the American College of Physicians and multiple state-level and academic public health organizations. That the agenda’s endorsing groups do not operate with “a political axe to grind” could help them draw more attention to climate change, said Ed Maibach, director of the Center for Climate Change Communication at George Mason University.

For voters who view climate change “primarily as a threat to things in the environment, like polar bears,” talking about the issue as a health problem could reframe their thinking, Maibach said.

“It’s incredibly helpful when health professionals point out the actual reality of the situation, point out that this is also a threat to our health and well-being now … and it’s likely to get worse, much worse, if we don’t take action to address it,” he said. NVG