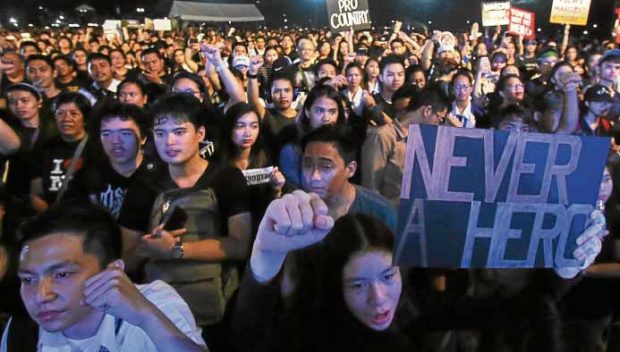 RAGING YOUNG Youth activists protest President Duterte’s decision allowing the burial of deposed dictator Ferdinand Marcos at Libingan ng mga Bayani in this November 2016 file photo. A 2019 survey showed that the majority of Filipino millennials are skeptical of public officials having a positive impact on society. —RICHARD A. REYES

MANILA, Philippines — Filipino millennials have little trust in political leaders and the media as sources of information and positive social impact, according to a recent study.

Among traditional institutions, political leaders were the most distrusted, with only 16 percent of the young people surveyed regarding them as accurate sources of information. Only 36 percent believed they had a positive impact on society.

A total of 301 millennials in the country were polled by Deloitte Philippines, a professional services company, for its 2019 survey that focuses on a segment of the population born between January 1983 and December 1994. No margin-of-error figures were mentioned in the results.

‘Caught in the crossfire’

The global report noted that the millennials’ distrust of traditional institutions could be influenced by how this generation had been “perpetually caught in the crossfire of social, political and economic commotion.”

“It’s a cause for concern when we see young people reporting that they have little trust for the organizations and institutions they’re supposed to look up to as leaders,” said Eric Landicho, Deloitte Philippines managing partner and CEO.

Even the media — both traditional and social — didn’t inspire much trust.

Only 22 and 21 percent of the Filipino respondents trusted traditional and social media, respectively, as sources of reliable information.

But in terms of positive impact on people, social media fared slightly better than the traditional one, 48 percent against 38 percent.

Ironically, an apparent love-hate relationship between the millennials and social media surfaced in the survey, even though their generation grew up with it.

Fifty-two percent, however, said they would be anxious if they could not check their social media accounts or had to give it up for a day or two. This is higher than the global average of 44 percent.

“You could say that this conflicted attitude toward social media is a reflection of the conflicting impact the platform has on the lives of its users,” Landicho said.

“It allows people to connect more easily with others across geographical and societal divides, but it also exposes users to so many serious risks, such as fraud and cyberbullying.”

According to the survey, 90 percent worried about being a victim of online fraud, while 78 percent admitted feeling they had no control over who had access to their personal data and how it was used.

Thirty-five percent said they would like to completely stop using social media.

Fifty-eight percent saw leaders of nongovernmental organizations as having a positive impact on society. Only 28 percent, however, agreed that they were reliable sources of information.

Also, 76 percent of Filipino millennials considered businesses as having positive impact, down from 93 percent last year. Worldwide, this view is shared by only 55 percent of those surveyed.

The dip in trust, according to the report, directly affects the spending habits of this “socially and environmentally conscious” demographic.

Forty-four percent of the Filipino respondents said that as consumers, they had ended their relationship with or reduced their patronage of a business entity because its products or services had negative impact on society or the environment.

Globally, 38 percent said they had the same response to such companies.

“For our part as business leaders, we have the responsibility to understand what is fueling this distrust or wariness, and then to take appropriate steps to mitigate or address it,” Landicho said.

As to what they thought of the country’s economic prospects and its social or political landscape, the respondents were not optimistic.

Globally, less than 33 percent expected their respective economies and sociopolitical situations to improve in the next few months.